Fanjing Mountain: A beauty in all its primitive glory(2) 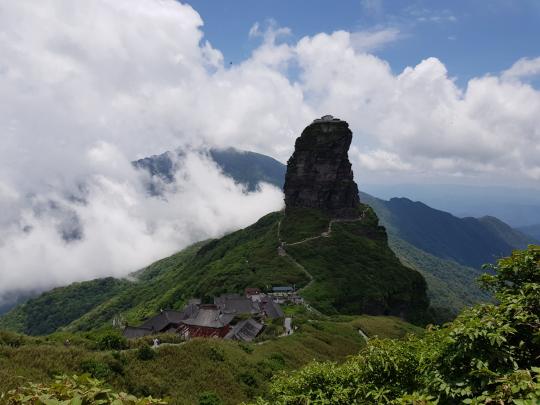 A mysterious mountain where blue skies and white clouds can turn into a misty cloudy scene in seconds. (CGTN Photo)

Altogether, the mountain has over 5,000 types of plants and animals, with residents living in the surrounding area, Zhou said. The mountain peaks at above 2,500 meters above sea level.

"At the same latitude, other places on earth could become deserts. But Fanjing Mountain still has a lush green vegetation, because animals live here. Snakes eat mice, squirrels," Zhou explained.

"And these small animals consume plants, while plants require the excrement of small animals to nourish them. So a complete ecological chain is formed here between animals and plants."

Fanjing Mountain was added to UNESCO's World Heritage List in July 2018 and has since seen changes.

"There has been some green transfer of development, such as the beekeeping industry, which was not paid much attention to in the past. Now, production of honey is flourishing – its value is high," Zhou said. 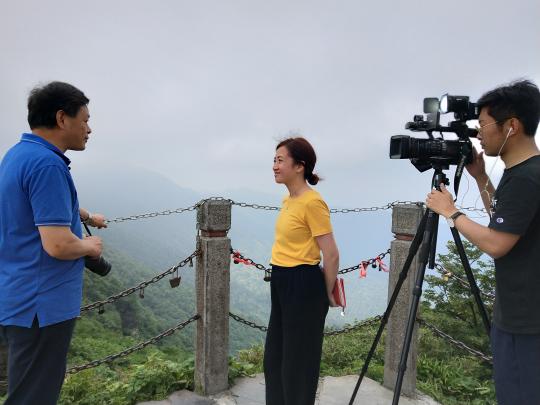 A refreshing interview at 2,000 meters above sea level. /CGTN Photo

Zhou added that villagers depend on the mountain for their livelihoods.

"Beekeeping, bamboo shoots and tea cultivation depend on this mountain. So locals are determined to protect it."

"Through aboriginal relocation, we have protected the interior of the mountain. We have also increased measures to prevent forest fires, through various controls and education," Wu said.