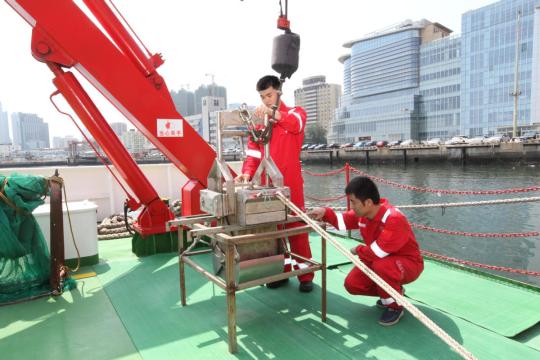 Scientists hope the research can provide support for ecological protection of offshore areas as well as disaster prevention and reduction.

"It is a fresh attempt to place four vessels on different seas in Chinese territory at the same time," said Li Chaolun, deputy director of the Institute of Oceanology of Chinese Academy of Sciences.

"Data to be gained during the exploration are expected to be more meaningful and comprehensive since they cover a wide range of sea areas at a certain period," said Li.

It has been a long-held ambition of marine scientists to have multiple vessels collecting data at the same time in different locations. Previously, offshore exploration depended on journeys by a solo vessel moving from one sea to another, which meant differing sea and climate conditions, Li added.

During the expeditions, the four vessels plan to carry out multidisciplinary investigations at 153 spots, especially in the Yangtze and Pearl River estuaries, where human activities have had a strong impact on the marine environment.

Fan Chonghui, the chief scientist on Kexue 3, said one of his team's tasks is to collect and analyze data on green algae which has frequently appeared in huge blooms in the Yellow Sea's coastal waters during summer.

The ongoing research is part of the "Health Ocean" project, to be implemented under the Center for Ocean Mega-Science, led by CAS Institute of Oceanology.

The institute's director, Wang Fan, said research on the ecology of coastal waters depends on observation and analysis, and it's necessary to build an offshore observation network to gain real-time and continuous data.

He added the new center, which is in the pipeline, aims to bring together facilities and researchers from 13 domestic marine institutes to make innovative contributions to China's marine studies.

"The new center is expected to include 10 research vessels and we will find better ways to manage them," added Wang.