Pompeo's claims about China full of lies and fallacy: FM 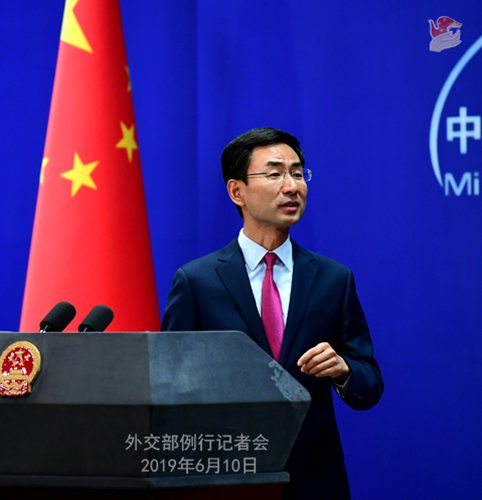 China has said U.S. Secretary of State Mike Pompeo's claims about China are "full of lies and fallacy," which only harm his own image and his country's credibility in the world.

"I want to remind Pompeo that people are not buying his rhetoric," Chinese Foreign Ministry spokesperson Geng Shuang told a press conference on Monday.

"For a while, Pompeo has been speaking about China everywhere he goes, but regretfully, his words about China are full of lies and fallacy," said Geng.

In a recent visit to Switzerland, Pompeo told the Swiss newspaper Neue Zuercher Zeitung that "The Swiss attach great importance to the protection of their privacy, and that for a long time… But if you operate with Chinese technology, you supply your information to the Chinese Communist Party. There is no privacy," according to Reuters.

"The U.S. government has always claimed that Chinese enterprises have 'security risks' but has not offered any convincing evidence on that throughout," said Geng, adding the U.S. has no morals in cracking down on a Chinese private company like Huawei by using its national power.

More people are taking an objective view toward Chinese technology companies'participation in their countries' building of fifth-generation (5G) networks, while more countries are making independent choices based on their own interests, said the official.

Huawei has signed 46 commercial contracts for 5G in 30 countries, and its shipment of 5G base stations has exceeded 100,000, ranking the world's first, the Shenzhen-based company said on Thursday.

"Huawei's 5G contracts include those with U.S.' allies and some European countries that the U.S. has painstakingly persuaded," said Geng.

Pompeo's claims were also rejected by Huawei's Swiss Vice President Felix Kamer who described those accusations as "absurd." Kamer said Huawei Switzerland was in constant contact with its customers to help reassure them about privacy concerns, according to swissinfo.ch.

"We will resist an American embargo on software and hardware," he said.

In Switzerland, Huawei intends to strengthen its research collaboration with the Swiss Federal Institutes of Technology and other universities.