Travelers use festival for visits, sightseeing 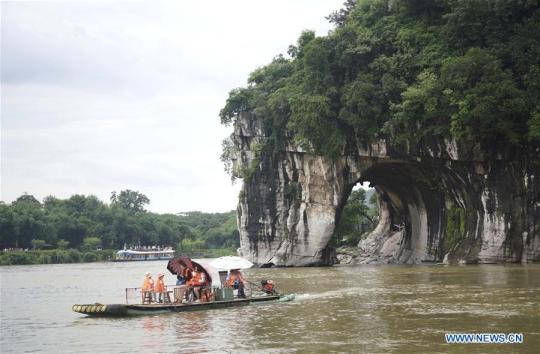 Despite the Dragon Boat Festival overlapping with gaokao, the national college entrance exam held in most provinces and regions on Friday and Saturday, people's willingness to travel remained strong.

Statistics from the Ministry of Culture and Tourism showed that almost 96 million trips were made domestically during the three-day holiday, which lasted from Friday to Sunday, a year-on-year rise of 7.7 percent. National tourism revenue increased 8.6 percent to 39.3 billion yuan ($5.7 billion).

Big cities in East and South China, such as Shanghai, Suzhou, Guangzhou, Hangzhou and Nanjing, were popular destinations.

Short trips by high-speed train or car were particularly favored, as 70 percent of tourists visited destinations no more than 300 kilometers from home.

In Beijing, major parks received 1.13 million visitors, up 6.9 percent from a year ago, the municipal park administration center said on Monday.

Daily visitors at the 11 municipal parks and the Museum of Chinese Gardens and Landscape Architecture on the day of the Dragon Boat Festival, which fell on June 7 this year, reached 360,000. The Summer Palace, Temple of Heaven and Beijing Zoo were the most popular destinations.

With the Cultural and Natural Heritages Day falling on Saturday, celebratory events and activities were held nationwide, including dragon boat racing, as well as wrapping and eating zongzi, pyramidal-shaped glutinous rice dumplings wrapped in reed leaves.

Li Qiuyan, director of the brand development department at Lvmama, an online travel agency, said that more tourists have opted to make use of traditional Chinese festivals, such as the Dragon Boat Festival, to participate in related activities and deepen their understanding of the culture.

"Travel packages offered on our website with activities such as wrapping zongziand watching boat races were well-received during the holiday, especially by people who had planned to travel with their children and aging parents," she said.

Xie Hui, a resident in Tianjin, loves traveling with her family during festivals, but she didn't go anywhere this holiday as she had to accompany her daughter, who sat for gaokao on Friday and Saturday.

"We will make it up by going to the beach during the upcoming summer holiday," she said.