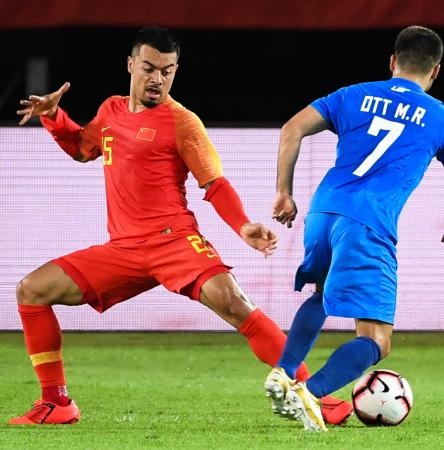 So far, so good for Marcello Lippi.

The Italian started his second term as Team China boss with a 2-0 victory over the Philippines in Friday's friendly in Guangzhou, Guangdong province, but can he make good on his pledge to help the national team qualify for the next World Cup?

The victory elicited rousing cheers from over 40,000 spectators at Tianhe Sports Center, and related topics surpassed 18 million views on Weibo over the weekend.

"No matter what the score was, even if it was 10-0, there's still a lot of things to be improved," said Lippi.

"There's still a lot of new players on the team. Some I have only known for just two or three days. With big improvements waiting to be made, the result of the game was satisfactory enough."

Friday's atmosphere was in sharp contrast to the moment when Lippi stepped down in January.

Coaching the oldest squad (average of 30.2 years) at the Asian Cup, the 71-year-old reportedly became furious in the dressing room after China's crushing 3-0 loss to Iran in the quarterfinals - an outburst that marked the end of his first two-year coaching term.

Even before he returned as boss, Lippi's assistants scouted matches in the Chinese Super League and second tier China League One.

Now the team has a new option, as the Chinese Football Association has begun importing naturalized players. CSL side Beijing Guo'an's Li Ke, known as Nico Yennaris in his native England, became the first naturalized player to join the national team, and he played a key role in securing Friday's victory.

"Li Ke fit in very well, and he was really focused during the match," said Lippi. "Before the game, we only had time for three training sessions. With the players we have now, the result of our training turned out to be great."

The victory also served as redemption for Li, whose ambition has been to help Team China return to the World Cup.

"Putting on the Team China jersey and playing for my country was an honor and a dream come true tonight," said the former Arsenal and Brentford player.

"Big thanks to my teammates for the great performance and making it a winning debut for me! It's a very special moment for me and my family. Also, thanks to all the fans for the amazing support.

"If I can help get the Chinese national team to the World Cup it would be the fulfillment of my dream," Li told British newspaper The Mirror earlier.

"There's some really good talent over here, but they probably don't get seen as much as they would in Europe. Hopefully we can come together with the national team and do something special."

Team China is still not at its best, as some core players, such as Espanyol striker Wu Lei, the first Chinese to score in La Liga, missed Friday's match due to injury.

"Wu Lei and Gao Lin were not in the lineup, but we played a good game," said Lippi. "The players had great attitude and they were very positive.

After helming his native Italy to World Cup glory in 2006, Lippi was unable to steer China to the World Cup finals in Russia in 2018.

Even with the help of naturalized players and the addition of Wu, the coach's job will not be any easier than his first term.

"There are some ongoing problems the Chinese squad is facing, such as the lack of strong strikers," said Lippi.

"Most of the strong forwards in the CSL are foreigners who make the most of their shots. There are not enough quality Chinese forwards, and we can't have Wu Lei right now.

"We are now trying to build a brand new team, but the young players still lack of the experience of playing major international matches.

"I am trying to give the young players more opportunities to gain experience, but there's still a gap between the young and the veterans. During the Asian Cup, I could only count on the veterans."