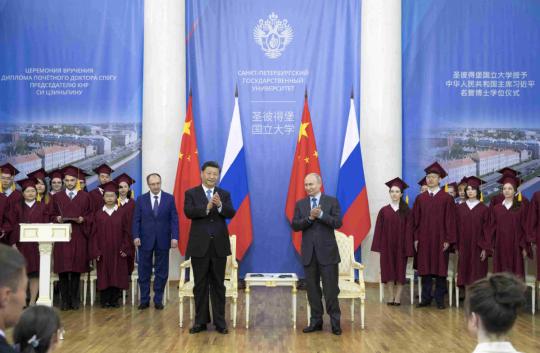 Xi was warmly welcomed by Putin when arriving at the main building of the university. After visiting an exhibition on the university's cooperation with China, the two heads of state stepped into the auditorium together, where they were met with a standing ovation from the faculty members, students and guests present.

In a speech delivered after being awarded the certificate by the university's rector, Xi said he feels honored to receive an honorary doctorate from St. Petersburg State University.

The university, he said, is a world-renowned and time-honored academic institution which has made remarkable contributions to the scientific, cultural and educational development of Russia and the whole world, and produced many sinologists excelling in both the Chinese language and culture.

Cooperation in education is an important way to help enhance people's understanding and friendship, Xi said, noting that the university's close exchanges and cooperation with its Chinese counterparts have promoted the Chinese culture in Russia as well as Russian studies in China.

Recalling that he witnessed the awarding of an honorary doctorate by Tsinghua University to Putin in April, he said Tsinghua University and St. Petersburg State University, respectively his and Putin's alma mater, are outstanding representatives of higher-education institutions in China and Russia.

Their conferring of honorary doctorates on the heads of state of each other's countries testifies to the close educational and cultural exchanges between the two sides, and demonstrates the high level of China-Russia relations, Xi added.