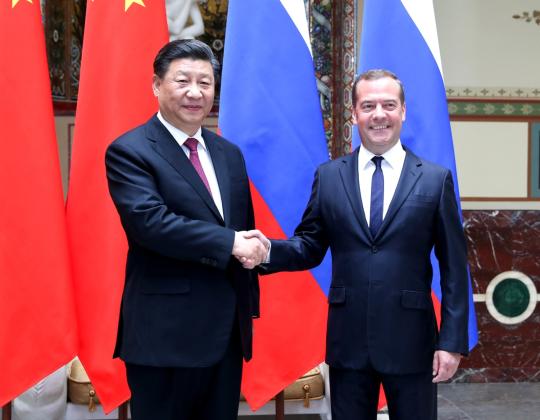 President Xi Jinping underlined the significance of strengthening ties between China and Russia in the new era on Thursday, urging the two nations to further intensify cooperation on bilateral and multilateral affairs.

Xi made the remarks while meeting Russian Prime Minister Dmitry Medvedev in Moscow. He said the China-Russia relationship has taken a stride into a new era.

Given the complex international situation, particularly the wrongful moves that attempt to contain the development of emerging markets, China and Russia's strengthening of their ties is of great significance in safeguarding the interests of themselves and their peoples as well as promoting world peace, stability and prosperity, Xi said.

Saying bilateral ties have maintained high-level development, Xi stated that they enjoy the highest mutual trust, coordination and strategic significance among the major country relations, having made important contributions to world peace, stability and development.

He called on the two countries to make further efforts to move forward cooperation in various fields to pursue sustained growth so as to bring more benefits to the two peoples and inject even stronger impetus into the two countries' development and rejuvenation.

The Chinese president also urged the two countries to strengthen their partnership in multilateral affairs such as the United Nations, World Trade Organization, BRICS and Group of 20, and contribute more China-Russia solutions to the international community.

Medvedev agreed with Xi on his statement about China-Russia relations in the new era, mentioning the joint statement signed by the two heads of state on Wednesday.

He said that some individual countries, regardless of the consequences, have blatantly violated international laws and the basic norms governing international relations, frequently imposed sanctions on other countries and suppressed their enterprises, which has curbed world economic growth and jeopardized the development of international trade.

Such acts are shortsighted and destructive, the Russian prime minister said, adding Moscow and Beijing should intensify their strategic coordination, and join hands to deal with the common challenges faced by both countries as well as the international community to safeguard world peace and development.

Russia stands ready to work with China to fully implement the consensus on cooperation reached by the two heads of state through the regular meeting of the prime ministers of China and Russia, including the alignment of the Eurasian Economic Union with the Belt and Road Initiative, Medvedev said.