Today is the ninth solar term, Grain in Ear, also known as Mangzhong. It marks the busy season for farmers as grains become mature. The China Pavilion Day that falls on this special day showcases the great achievements China has made in green and sustainable development over the years. 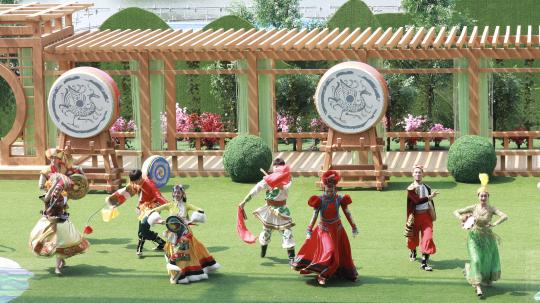 The performance at Guirui Theatre on the China Pavilion Day. /CGTN Photo

As one of the cradles of modern horticulture, the Chinese have long learned how to make use of plants in their daily lives. On the ground floor of the China Pavilion, visitors can see 24 plant species appearing in the Book of Songs, the first poetic anthology of China. The Chinese lacquer tree, also known as Qi, has been used to make lacquerware since the pre-Qin period (BC2100-221). The common madder recorded in the poem was not only a red dye, but also an important medicine.

This horticulture tradition has been passed down the generations. When you walk through the exhibition areas of different provinces, you can see how flowers like plum blossoms, orchids and peonies bloom together thanks to the present horticultural techniques. The precious golden camellia that is mostly distributed in a limited area in south China's Guangxi Zhuang Autonomous Region is displayed here, allowing visitors to watch the distinctive flora of the province in one pavilion.

Among those plants displayed in the pavilion, some of them are rarely seen and endangered. The golden camellia mentioned above is under first-class state protection and is nicknamed the giant panda in the plant kingdom. Now, there are 44,510 kinds of plants in China and 246 of them are endangered and under state protection. The government has stepped up conservation efforts to preserve the biodiversity and the ecosystem as a whole. 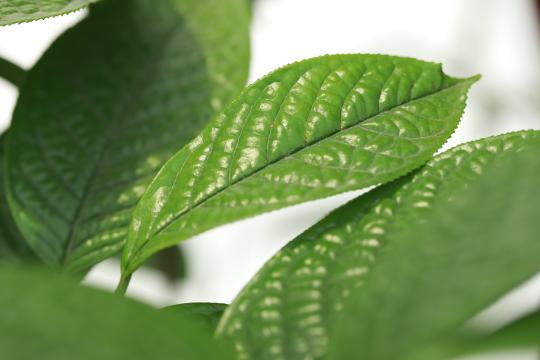 The leaves of one type of golden camellia. /CGTN Photo

Globally, around one million animal and plant species are now threatened with extinction, according to the latest UN report. As China is the host country for the 2020 UN Biodiversity Conference, it's essential that China allocate resources and use technology to protect those endangered species because humanity depends on the diversity of lives and nature.

If you look at the roof of the China Pavilion, there are patches of yellow and transparent glass. These 1,056 pieces of solar glass can generate electricity and support the lighting system for exhibition halls on the second floor, which is eco-friendly and sustainable.

In his speech, Chinese Vice Premier Hu Chunhua said that China would promote green development of the Belt and Road Initiative. Besides, China would work with other countries to accelerate the research and application of green technologies.

Before you walk out of the China Pavilion, you can see 12 successful stories of China's ecological protection on the giant screens. A case worth noting is the once barren Kubuqi Desert in northern China's Inner Mongolia Autonomous Region. Through decades of anti-desertification efforts, 6,000 square kilometers of the desert were turned into green space. Not only were 100,000 farmers lifted out of poverty, but the sandstorms annoying Beijing citizens also decreased.

According to a new study based on NASA satellite data, China has contributed 25 percent to the greening of the world between 2000 and 2017. Nearly half of the greenery expansion comes from forest conservation and planting. In 2018, China planned to increase the national forest coverage to 26 percent by 2035. More conservation efforts are expected to be seen in the coming years.

The theme for expo this year is "live green, live better." As Tim Briercliffe, secretary general of the International Association of Horticultural Producers, said that live green is not only for a better life, but for life itself. Let us all join the green and low-carbon lifestyle from today. For nature. For us.