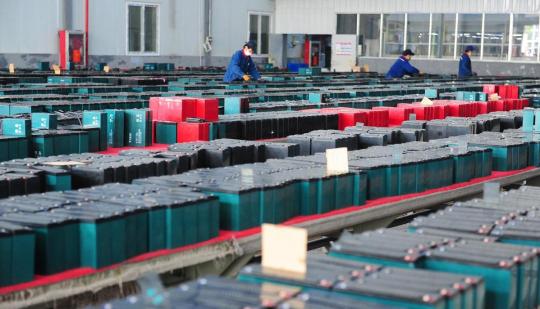 Staff of a company making recycled fuel batteries for electric vehicles work on a production line at an industrial park in Jieshou, Anhui Province. (Photo by Wang Biao/For China Daily)

Private companies may get nod for developing, running industrial parks

Manufacturing and modern services firms from overseas will get incentives to invest in China's economic and technological development zones as part of the country's ongoing efforts to boost foreign investment, an official said on Wednesday.

Tang Wenhong, head of the department of foreign investment under the Ministry of Commerce, said at a news briefing that the country will further unleash the potential of its national economic and technological development zones to attract overseas investment.

According to a guideline published by the State Council on Tuesday, the opening-up of these zones will be bolstered by attracting private and overseas investors to develop and run industrial parks with distinctive features.

Companies and investors from Hong Kong, Macao and foreign countries will be encouraged to participate in the running of international cooperation parks in the development zones, which has reached a total of 219 nationwide.

"The coordination between Chinese and foreign businesses will improve and in turn boost the industry chain of the manufacturing sector. This will help businesses to better adapt to the global value chain," Tang said.

More measures will be taken to make the business environment of the zones fair, transparent, predictable and compatible with international practices and ensure that domestic and foreign businesses are treated as equals, he said.

According to the guideline, the development zones will be urged to intensify efforts to attract more headquarters, research and development and financial departments of international companies.

For overseas professionals that are urgently needed by businesses in the zones, the age limit for work permits would be relaxed further, the guideline said, adding that more policies will be rolled out to ease procedures for high-caliber overseas talents in border entries, residence and permanent residence permits.

The country's economic and technological development zones contributed to 11.3 percent of its total GDP, 10.6 percent of fiscal revenue and 20.4 percent of foreign investment in 2018, according to the Ministry of Commerce. The total volume of exports and imports in the zones reached 6.2 trillion yuan ($898.6 billion), or 20.3 percent of the country's total, up by 10.8 percent year-on-year.

Wang Shouwen, vice-minister of commerce, said at the briefing that the development zones will take the lead in cutting licensing red tape, simplify approval procedures and move forward with online administrative services.

"We will support their continuous efforts in attracting international high-end industry resources and developing advanced manufacturing and modern services," he said.