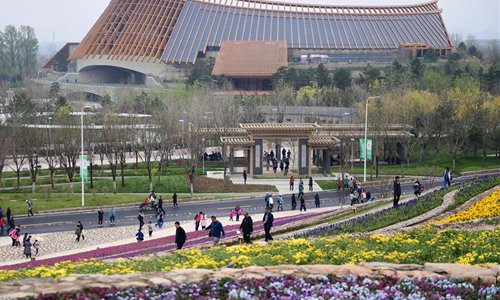 Visitors tour the site of the 2019 Beijing International Horticultural Exhibition (Expo 2019 Beijing) during a trial run in Yanqing District of Beijing, capital of China, April 20, 2019. Beijing on Saturday held a trial opening of the site for the upcoming 2019 Beijing International Horticultural Exhibition to test the reception capacity of the event. About 60,000 people visited the 503-hectare expo site Saturday. （Photo: Xinhua）

A grand international horticultural exhibition, scheduled to kick off on Monday, is widely seen as the best way to demonstrate China's achievements and commitment to global ecological construction.

President Xi Jinping attended the opening ceremony on Sunday evening, calling for the pursuit of harmony between man and nature.

Xi said that the overall balance of the Earth's ecology should be maintained, so that the starry sky, lush mountains and floral fragrance will be retained for future generations who will enjoy material prosperity at the same time, the Xinhua News Agency reported.

The theory was first raised by Xi in 2005 during an inspection tour to Anji, East China's Zhejiang Province. Xi reaffirmed the theory during several inspection tours after the 18th National Congress of the Communist Party of China (CPC) was convened in 2012.

He proposed embracing simple, moderate, green and low-carbon ways of life, and making the idea of ecological and environmental conservation the mainstream culture in society.

This is the second high-level horticultural expo held in China after the last one was hosted in Kunming, capital of Southwest China's Yunnan Province in 1999.

The expo is being held at a 503-hectare site at the foot of the Great Wall in Beijing's Yanqing district, which is a national progress demonstration district and an innovative base for practicing the theory of "lucid waters and lush mountains are invaluable assets," an expo brochure reads.

From Monday until October 7, more than 16 million visitors are expected at the expo, which will host 2,500 activities, including academic conferences, horticulture competitions and flower parades, officials from the organizing committee said at a press conference on Thursday.

The expo will provide opportunities for the world to see what China has achieved as there are many greening programs around Beijing, such as the Three-North Shelterbelt Forest Program, said Ding Yifan, a research fellow of the Institute of World Development at the State Council's Development Research Center.

"It will also be a platform for different countries to exchange experiences in green development," Ding said.

Geng Liwen, an expo volunteer from the Beijing Forestry University, told the Global Times on Sunday that she is happy to see more Chinese people paying attention to the idea of green development. "This will benefit sectors related to forestry, including parks and city planning," she said.

One of the keys to China's great achievement in green development is participation by governments, business and local residents, Ding said.

China accelerated the promotion of green development after the 18th CPC National Congress. Since then, it had implemented more than 40 plans, including establishing an accountability system, a national park system and cracking down on imports of foreign waste to enhance construction of an ecological civilization, the People's Daily reported on Sunday.

This year also marks the 40th anniversary of China's National Tree Planting Day, which takes place every year on March 12. In the past 40 years, China's forest area and forest stock volume have doubled, the Xinhua News Agency reported.

The proportion of China's contribution to the world's vegetation increase also ranks first. A NASA report released in February revealed that China accounted for at least one-fourth of the 5 percent increase in global green leaf areas between 2000 and 2017, although this also includes cropland.

For example, Alipay, the mobile and online payment service of China's e-commerce giant Alibaba Group Holding, launched a program in 2016 to help users to plant real trees in arid areas by collecting virtual energy points through a low-carbon lifestyle. The program had planted more than 55 million trees covering about 507 square kilometers across China as of February.

Besides planting trees, efforts have also been made in China to adjust the energy structure and control industrial discharge. The proportion of coal consumption has decreased by 1.4 percent to 59 percent of the country's total energy consumption in 2018, according to the National Bureau of Statistics.