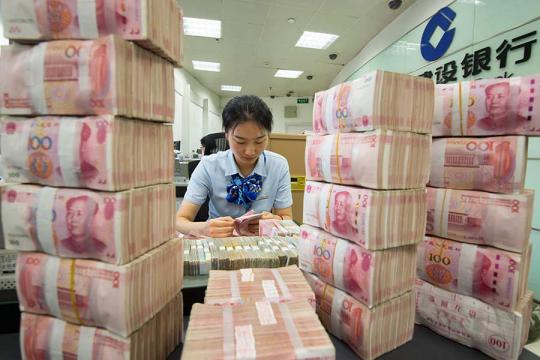 The Chinese yuan is likely to stay stable for the rest of the second quarter, and might advance moderately amid brightened economic prospects and foreign capital inflows relating to index inclusions, analysts said.

"During the second quarter, the onshore spot rate of the renminbi against the greenback is expected to hover around the current 6.7 without any big fluctuations," said Mei Dongzhou, an associate professor from the Beijing-based Central University of Finance and Economics. "It may even head for 6.6, as previous appreciation themes should continue."

Central parity rate of the onshore renminbi on Friday was 6.73 against the U.S. dollar, up 1.93 percent since the beginning of the year. During the same period, the offshore yuan also strengthened by 2 percent to 6.73 against the dollar.

The appreciation was mainly attributable to a renewed appetite for emerging markets, the surge in Chinese stock markets and easing Sino-U.S. trade tensions, Jameel Ahmad, global head of currency strategy and market research at FXTM, an international foreign exchange platform, wrote in a note.

"With these same factors plus others potentially gathering further momentum over the course of the second quarter, the currency can continue to advance," Ahmad wrote, adding the inclusion of Chinese onshore bonds in a key global benchmark would contribute to the trend.

The Bloomberg Barclays Global Aggregate Index started to include Chinese government and policy bank bonds on April 1. As global portfolio managers use the index in their asset allocations, the move may bring foreign capital inflows of more than $100 billion by November 2020, analysts said.

Moreover, global index compiler MSCI Inc has announced it will raise the weighting of A shares in its indexes in three phases from May this year, which may funnel nearly $70 billion in overseas capital into mainland-listed stocks.

Taking the potential inflows into account, Ahmad said the offshore yuan may advance to below 6.60 against the dollar by the end of the second quarter.

This trend has helped stabilize market expectation of the yuan, said Yang Weiyong, an associate professor of economics at the University of International Business and Economics in Beijing.

On April 17, China released its economic growth data for the first quarter, which stood at 6.4 percent year-on-year and beat forecasts, according to the National Bureau of Statistics.

On the back of the GDP data, the offshore yuan surged more than 230 basis points to 6.6823 per dollar on that day.

"But the yuan is not heading for any major appreciation," Yang said, citing the regulators' policy stance of further improving the exchange rate regime and "keeping the renminbi exchange rate generally stable at an adaptive and equilibrium level".

Agreed Mei from CUFE. "Despite the index inclusions, foreign capital might not steadily flow into the Chinese market," Mei said.

Also, Sino-U.S. trade frictions, Mei said, may not be fully resolved immediately, making "a major boost in the yuan unlikely".

Analysts also cautioned that some factors like adverse developments in the China-U.S. trade imbroglio, and a slower-than-expected recovery of the Chinese economy could dim the prospects of the yuan in the short term.

In the long term, however, the yuan may face appreciation pressure against the dollar, because for many years ahead, China would still be on track to the higher growth than the U.S. as a developing country, Mei said.