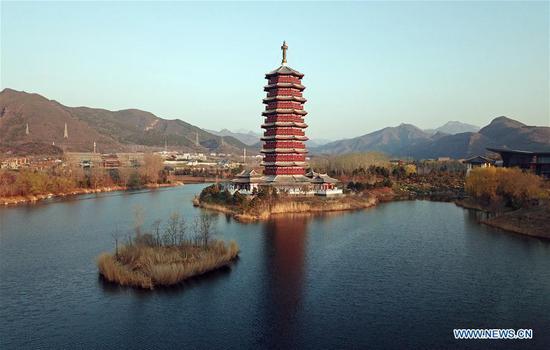 Aerial photo taken on April 4, 2019 shows the scenery of Yanqi Lake in Beijing, capital of China. The second Belt and Road Forum for International Cooperation is to be held on April 25-27 in Beijing. (Xinhua/Cai Yang)

With the second Belt and Road Forum for International Cooperation (BRF) taking place here, leaders around the globe are speaking highly of the initiative and voicing their expectations for the gathering.

The Belt and Road Initiative (BRI), a reference to the Silk Road Economic Belt and the 21st Century Maritime Silk Road, was initiated by China in 2013 with the aim of enhancing all-around connectivity through infrastructure construction, exploring new driving forces for world economic growth, and building a new platform for world economic cooperation.

The BRI has created a new dimension for the development of the world economy, and its long-term strategic plan is unusual, said President Ueli Maurer of the Swiss Confederation.

The Swiss president believed that globalization is the key to successful global development, and to achieve globalization, infrastructure construction at various levels would be indispensable.

In this sense, he said, the BRI is a future-oriented project that will contribute to globalization, in which everyone can benefit from improving and upgrading infrastructure.

For his part, Malaysian Prime Minister Mahathir Mohamad said he had advocated the revival of the ancient Silk Road for a long time and believed the BRI will boost connectivity between China and Southeast Asia.

"In the promotion of relations between countries, the distance as well as the speed of travel is very important. With this scheme, I am quite sure more ships will be passing near Malaysia and Southeast Asian countries and therefore it will increase trade between Southeast Asia and China."

The 93-year-old prime minister will be joining other heads of state or government at the forum to discuss cooperation under the BRI, for which he has repeatedly expressed support.

Tajik President Emomali Rahmon called the Belt and Road a multi-faceted "bridge" which can help unlock the transit potential of the landlocked Central Asian country and enable it to access worldwide markets.

"The BRI implies creating a new model of international cooperation by strengthening the existing mechanisms, as well as seeking and implementing new mechanisms, with the aim of stimulating the economic development of countries involved," Rahmon said.

Calling the BRI a "fantastic infrastructure project," Czech President Milos Zeman said, "I encourage Czech companies to participate in the construction of the new Silk Road, especially the railway construction. We have a good tradition in this area."

Conte said Italy is glad to seize the historic opportunity to join the BRI, adding that he strongly believes that it will help fully explore the potential of Italy-China cooperation.

United Nations (UN) Secretary-General Antonio Guterres, who will host a seminar about green growth at the Belt and Road forum, said the BRI is a "very important opportunity" for the world.

With such a huge volume of investment for international cooperation brought about by the BRI, it is a "very important opportunity for enhancing the capacity to implement the sustainable development goals and an important opportunity to launch green perspectives in the years to come," Guterres said before leaving for Beijing.