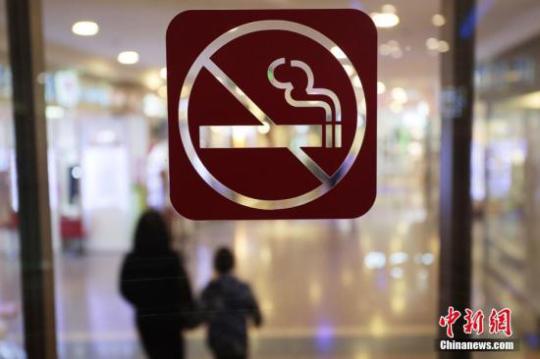 A no-smoking sign is displayed at a shopping mall on Feb 14, 2019. (Photo/Chinanews.com)

All tourist beaches in Qinhuangdao, Hebei province, will become smoke-free if a new draft regulation on smoking is approved by the local government.

If approved, the rule would make Qinhuangdao the first city to ban smoking on beaches.

Drafted by the city's health commission, the regulation would also ban smoking in all indoor public spaces, workplaces and public transportation vehicles, as well as in some outdoor public areas, including scenic areas and near children's hospitals, schools and libraries.

E-cigarettes would also be prohibited.

The draft has been released on the city's website to solicit public opinion.

"By including beaches in the spaces where smoking is banned, we can set a standard for other coastal cities to follow," Liao Wenke, deputy director of the Chinese Association on Tobacco Control, was quoted as saying by china.caixin.com.

Banning smoking on beaches is an international trend, according to an article on the association's website.

It said Thailand, a popular destination for coastal tourism, initiated smoking bans on its 24 beaches in February last year.

Wang Na, a 31-year-old from Qinhuangdao who has a 3-year-old daughter, said the smoke-free environment will encourage her to spend weekends with her family on the beaches more often.

"I don't like the smell of cigarettes and hate to let my daughter be exposed to it," Wang said, adding that she often sees discarded cigarette butts on the sand.

Located about 250 kilometers east of Beijing, Qinhuangdao, on the shore of the Bohai Sea, is one of the most popular coastal cities in northern China.

According to the Qinhuangdao Bureau of Statistics, the city received more than 60 million tourists from home and abroad last year, an increase of 19 percent year-on-year.

"The challenge is to enhance the public's awareness of smoking and to make smokers abide by the regulation," Liao said. He added that the authorities should strengthen publicity about the harm done by cigarettes and tobacco.

To create a smoke-free environment, 18 Chinese cities had carried out anti-smoking regulations by the end of 2017, covering one-10th of the population, according to the National Health Commission.

The regulation in Beijing, one of the toughest, has had an effect. From 2015 to 2018, the rate of discovering smoking or cigarette butts in public spaces in Beijing was cut from 28.7 percent to 4.9 percent of spaces inspected, according to an article on the tobacco control association's website.