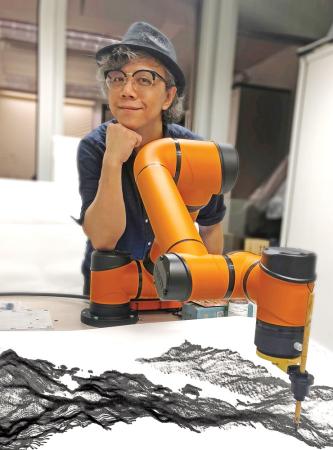 The latest Chinese ink artwork created by an artificial intelligence robot is on display in London.

Made by Hong Kong artist and inventor Victor Wong, the robot artist, which is named Gemini, has an "arm" that dips its brush into ink and water before sweeping across xuan paper to create Chinese shuimo artwork.

The AI features random algorithms that mean Wong does not know how the paintings the robot creates will turn out. Each landscape painting can take around 60 hours to create.

Wong told China Daily he has been interested in traditional art since he was young and, with his background in computer graphics and special effects, he decided to bring technology and ink art together.

It took Wong around three years to build and program Gemini, which was then trained in mastering simple brush strokes. Wong also programmed the robot to develop its own recognizable style, rather than to simply copy the work of masters.

"I started teaching Gemini the fundamentals of the brush. Such as how to use the brush, the ink, and water on paper and using the robot arm," Wong said. "I asked Gemini to first create his own landscape in his AI mind, and then find an angle, because it is 3D, so then he's traveling inside his mind and picking up an angle, and draw that angle using the ink paint."

In his latest exhibition, Far Side of the Moon at the 3812 Gallery in London's Mayfair, Wong found inspiration from China's Chang'e 4's exploration of the far side of the moon.

He fed Gemini with Chang'e 4 images and 3D observation data from NASA, which the robot analyzed and interpreted in its own style to create unique lunar landscapes.

"I spent four months on this series. Every time, when a single piece comes out, it's a surprise," he said. "There are angles that I never thought about, there are the brush strokes, the combination of the water, and the ink … The combination is so great, and I can say every piece is a masterpiece."

Whether robots, or AI, can eventually have the same creative and emotional capacities as human artists is not known but Wong argued Gemini already senses emotions and environments.

"Emotion is our internal or mental response to something, or response to our surroundings," he said. "Let's say on rainy days, you will feel blue. On sunny days, it looks like everything has a bright future. So, that will affect our emotions. I have input real-time data of humidity and temperature during Gemini's painting. So, when he paints, if it is a rainy day, you see that he uses more water on the surface of the paper. So that is how I try to emulate the emotions."

Wong added that he wanted to create something that people can talk about and that will open up debate about whether AI-created art is valid.

"I love Gemini so much now," he said. "Without Gemini, I could not create these kinds of paintings."

Calvin Hui, co-founder of 3812 Gallery, said:"Victor Wong's work with AI Gemini defines a new movement in ink art – Tech Ink. It is disrupting the art world and Chinese ink, expanding the possibilities technology can offer creativity whilst mindfully exploring the challenges of this relationship."

It is not the first time technology and art have been combined, last year a French trio known as Obvious, programmed an AI robot to create art resembling pre-20th century portraits.

A portrait they created fetched nearly 45 times its expected price when it sold at auction at Christie's for $432,500. It is thought to be the first piece of AI art to be sold at auction.

Contemporary art experts pointed out that artists have used and contributed to scientific and technical innovations throughout history.

"Uses of AI, or more accurately computer algorithms, by contemporary artists such as those associated with the Obvious group and Gordon Cheung as means of producing art works is part of this broader historical tendency," said Gladston, who is also professor of contemporary art at the University of New South Wales in Sydney."Alongside AI, there is also an increasing global attention to the traces differing aesthetic traditions as part of contemporaneity. That attention is by no means simply conservative. What seems to be emerging is an uncertainly dynamic commingling of culturally and technically divergent aesthetics and not the abrupt ending of art as predicted as part of postmodernism and as arguably enacted by the advent of AI."