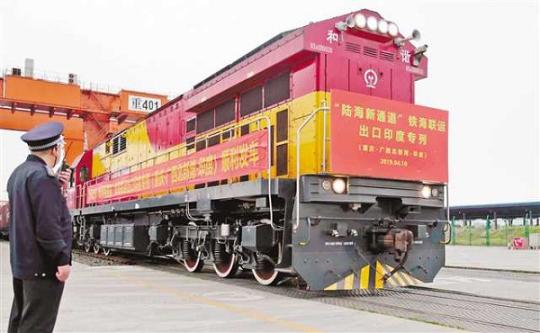 The first special train carrying cargo to India along the New International Land-Sea Trade Corridor sets off from Chongqing. (Photo/liangjiang.gov.cn)

On the eve of the annual spring meetings of the International Monetary Fund and the World Bank-which saw finance ministers and central bankers from across the world gathering in Washington on April 12-14-the IMF World Economic Outlook 2019 projected a sharp decline in the growth rates of 70 percent of the economies including the advanced G7 economies, except Japan.

However, this global deceleration, already softened to 3.6 percent for 2018 and estimated to slide further to 3.3 percent for 2019, is projected to stabilize at 3.5 percent from 2020.

What is interesting in this projection is that China and India-expected to sustain growth rates of more than 6 percent and 7 percent, respectively-will further strengthen their positions as engines of global growth and also enhance their share in global income. While India's growth is projected to increase from 7.1 percent last year to 7.3 and 7.5 percent in 2019 and 2020, China's growth is projected to decline from the current 6.6 percent to 6.3 and 6.1 percent.

Indeed, observers say the global deceleration has been triggered largely by the economic slowdown in China that has been contributing one-third of global growth for the past few years. In turn, the global slowdown has triggered a sharp decline in China's foreign trade, which consecutively has contributed to the shrinking of emerging economies such as Argentina, Iran, Turkey, Saudi Arabia, Venezuela, and even advanced economies like Australia, Britain, Canada, Germany and France.

China, nevertheless, continues to be seen as the main driver for global growth. This is because China's economy is four times larger at market exchange rate and 2.5 times larger in purchasing power parity terms than that of India, the fastest growing large economy. This makes the nature of the two countries' economic engagement even more important as it has direct and deeper implications way beyond their bilateral equations.

Therefore, before interpretations on India's expected absence from the second Belt and Road Forum for International Cooperation in Beijing later this month go too far, it is important to flag various extant as well as emerging contours in their expanding economic engagement.

At the most visible level, the last two years have witnessed an impressive rise in China-India trade, which crossed $95 billion in 2018. China's investments in India have been growing in leaps and bounds: from $668 million in 2016 to more than $3 billion in 2017 and $5.6 billion last year. So all is not lost if, for understandable reasons, India is absent at the coming Belt and Road Forum for International Cooperation.

In early 2018, President Xi Jinping introduced a new innovative mechanism called the"2 1 model" that provides for equal BRI partnerships to Asia's second-and third-largest economies, Japan and India. The offer was made to Indian Prime Minister Narendra Modi during the informal China-India summit in Wuhan in April 2018 followed by a similar offer made to Japanese Prime Minister Shinzo Abe. Last October saw China and India successfully completing their first "2 1" joint training program for Afghan diplomats and both sides continue to explore similar joint ventures in other South Asian countries. Similarly, such a partnership with Japan would inject added vitality into the Belt and Road Initiative in Southeast Asia.

Although the US administration has been equally whimsical in dealing with most countries including its friends and allies, and that includes India, none of those economic tussles have had severe global implications.

The paradox is that a continued deceleration of the US economy will also hurt China, which holds US Treasuries worth $1.8 trillion. China's recent overdrive in engaging European nations seems instructive on how China and India should continue brainstorming on new innovative strategies.

What has worked for China's unprecedented rise in the past four decades might not work for the next 40 years. With the US falling prey to its periodic "isolationist" impulses, the IMF World Economic Outlook 2019 is one more reminder that this is the time for China to shed the old and look for new strategies and partnerships for garnering system-shaping power in order to help build a community with a shared future for mankind.

The author is professor at Jawaharlal Nehru University, New Delhi, and has just published a book, Corridors of Engagement (2019). The views don't necessarily represent those of China Daily.