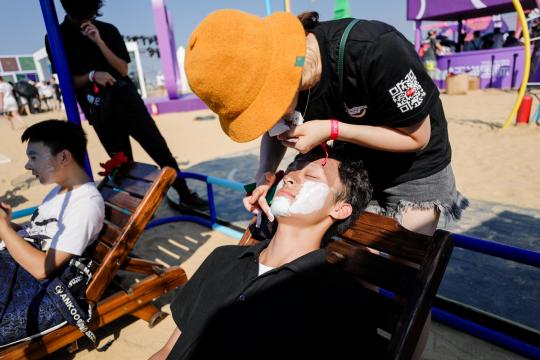 The seemingly odd coupling of men and makeup is quietly changing the definition of masculinity.

If you consider buying a gift for your father or better half, why not add facial masks or anti-aging cream to your gift list on top of razors and smart gadgets?

It turns out that the skin care market for men in China has enjoyed over 50 percent growth for two consecutive years from 2016 to 2018, according to Alibaba's Tmall platform.

Notably, last year, sales of cosmetics for men surged 89 percent year-on-year on Tmall, higher than that of facial lotions, fragrances and oral hygiene products, though those items also experienced tremendous growth, the company said in an annual report on beauty trends.

This echoed a finding by market research house Euromonitor, which pointed out that the growth of men's beauty and fashion products has outpaced that of women's since 2010, suggesting that men are increasingly becoming interested in shaping their own appearance.

There are several factors driving the growth of the male skin care and cosmetics market in China. Lucus Wang, art director of hair salon and spa chain Amani in Shanghai, pointed to the improvement in quality of life and the popularization of skin care as key reasons.

"Around 99 percent of male customers lack knowledge of their skin type and how to protect their skin. As such, the market is producing products designed to address these factors," said Wang.

Queenie Lin, former general manager of Biotherm, a brand under L'Oreal, agreed. "Skin care is not limited to just looking good. It is also related to men's pursuit of confidence," she said.

According to L'Oreal, men are becoming increasingly interested in using products that are specifically designed for them and are no longer satisfied with sharing products with family members.

And the male skin care and cosmetics market is thriving in most first-tier cities in China, the company pointed out that there are still over 500 million potential customers in more than 200 emerging cities.

This also has to do with changing demographics. While Chinese men born in the 1980s can barely accept the idea of using foundation, the post-90s generation are more likely to use popular online products such as BB cushions and eyebrow powder, according to fashion commentator Mao Xun.

"Personal grooming, such as cutting fingernails, will help to give men a good image," he said.

"Not so many years ago, moisturizer was taboo, and it's now commonplace," Brendan Gough, professor of social psychology at Leeds Beckett University, was quoted by CNN as saying. "Makeup is one of the last bastions of femininity that men are encroaching upon", alongside other areas traditionally dominated by women, such as cooking and child care.