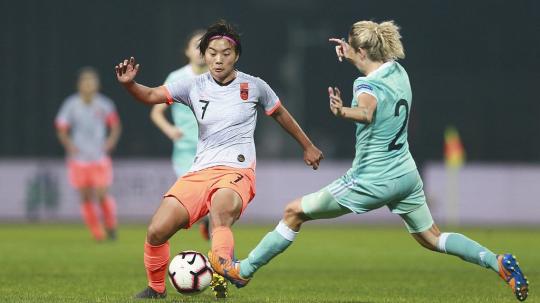 China claimed a 4-1 victory over Russia at the four-nation invitational women's soccer tournament in Wuhan, Hubei Province, on Thursday.

It was just seconds after Wang Shanshan was sent on as a substitute, and with her first touch of the ball, the 29-year-old veteran converted in star teammate Wang Shuang's corner kick in the 65th minute, breaking a 47-minute deadlock between the two sides.

Just nine minutes into the game, the tall and strong Russian team scored through midfielder Nadezda Smirnova, who found the goal via chaos inside the hosts' penalty box.

China then pulled one goal back at the 18th minute as the hosts cut off the Russians and launched an attack of their own before starting striker Yang Li shot from a tight angle.

The 1-1 tie was held for the rest of the first half, although China led in possession and made more efforts along the other end.

Chinese head coach Jia Xiuquan opted to rest Paris Saint-German striker Wang Shuang for the first half, and didn't send her on until shortly after the break to enforce China's attack.

Wang, the AFC's Female Player of the Year in 2018, who's hanging over an injury for the last few months, helped the hosts improve a lot in organizing attacks, and her efforts finally turned into goals after Wang Shanshan was sent on.

She launched the ball to Song Duan and the latter scored the third for China side at the 75th minute, just two minutes before Wang Shanshan's second goal, which killed the match at 4-1.

The Cameroon women's soccer team snatched a 2-1 victory over Croatia to open the tournament earlier on Thursday.

Forward Madeleine Michele Ngono-Mani tabbed in to break the deadlock in the 33rd minute after wasting a couple of chances.

Cameroon, however, put themselves ahead on the scoreboard after Henriette Michelle Akaba-Edoa kicked in Gabrielle Aboudi Onguene's cross in the 83rd minute.

The Indomitable Lionesses, whose squad included 12 players based overseas, earned free kicks in the 25th and 27th minutes with the latter just from a little bit out of the box, but both Therese Abena and Aboudi Onguene missed their chance to score.

With the victory, Cameroon sealed a spot in Sunday's final and will vie for the trophy against China.

The tournament in Wuhan is the first international games for Cameroon after they qualified for the Women's World Cup through the 2018 Women's Africa Cup of Nations in Ghana last December.

China is the only other team in the four-nation tourney that has made a berth to the finals this summer in France.