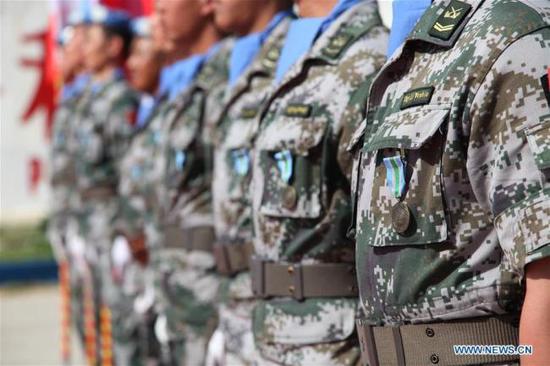 File photo: Chinese peacekeepers wearing the United Nations Peace Medal of Honor are seen at the awarding ceremony at the camp of the Chinese peacekeeping multi-functional engineer detachment to Lebanon in Hanniyah village in southern Lebanon, on April 6, 2018. [File photo: Xinhua]

Chinese peacekeepers at the UN Interim Force in Lebanon (UNIFIL) received UN medal Wednesday for their contribution to keeping peace in southern Lebanon.

A medal ceremony was held at the Chinese troop's camp in Hanniyah village in southern Lebanon, with the attendance of head of Mission and Force Commander of the UNIFIL Stefano Del Col, Chinese Ambassador to Lebanon Wang Kejian, representatives of the Lebanese armed forces and fellow peacekeepers.

Awarding the medal, Major General Del Col said that "the medal you will receive today is a sign of appreciation for your important contribution to the UNIFIL Mission, a precious memory that will stay with you as a reminder of your work in Lebanon."

Del Col praised the Chinese peacekeepers for their hard work, bravery and determination, saying "I want to thank all of you for the job you carry out with professionality, commitment and dedication, promoting a culture of peace and proactiveness that well contributes to the implementation of our mandate within the framework of Security Council Resolution 1701."

During the past 11 months, the Chinese peacekeepers have swept over 6,690 square meters of minefield and cleared over 1400 AP mines, completed 68 high standard engineering projects, provided physiotherapy and rehabilitation and clinical services to over 8,600 peacekeepers and humanitarian medical assistance to over 3,500 local villagers.

The UN Security Council established the UNIFIL on March 19, 1978 to monitor the withdrawal of Israeli forces from southern Lebanon. Its mandate was expanded following the 2006 Lebanon War.

Since 2006, China has maintained a peacekeeping force in southern Lebanon as a part of the UNIFIL, tasked with missions such as mine-sweeping, project construction, medical rescue and humanitarian assistance.