Economists said the rise showed policies to bolster growth have begun to pay off, and the world's second-largest economy is likely to achieve steady expansion this year.

The PMI, released on Monday, recovered for the second consecutive month and stood at 50.8 in March, versus 49.9 in February.

A reading above 50 indicates expansion, while one below reflects contraction.

The result was in line with the official PMI reading, which came in at 50.5 in March, compared with 49.2 in February, with all five subindexes registering improvements, the National Bureau of Statistics said on Sunday.

"Activity in the manufacturing sector expanded as the Spring Festival holiday ended, while higher market confidence also contributed to the rise in the PMI," said Liu Chunsheng, an associate professor of economics at Central University of Finance and Economics in Beijing.

Market confidence has been bolstered by tax cuts and other policies aimed at stabilizing the economy, concrete reform and opening-up measures, and recent progress in trade talks, Liu said.

"Moreover, signs of stabilizing employment are very encouraging, as they may point to more room for policymakers to maneuver toward a balance between economic restructuring and stable growth," he added. 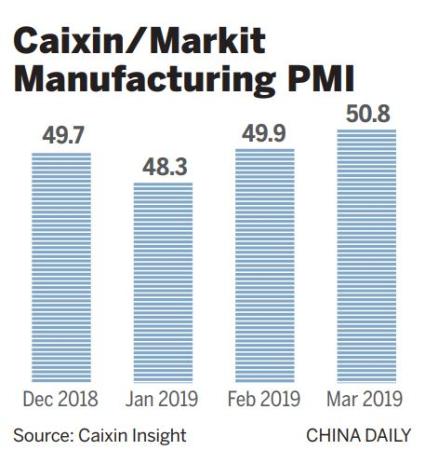 According to Caixin, staffing levels at goods producers increased in March, marking the first expansion since October 2013. Meanwhile, they have an optimistic outlook regarding production for the coming year, which improved to a 10-month high in March.

Despite the improvements in the economic situation, potential risks that may weigh on the Chinese economy still exist, ranging from external uncertainties to domestic factors such as sluggish consumption and financial risks, economists said.

Michael Spence, a professor at New York University and a Nobel laureate in economics, said the Chinese economy will "slow a bit" this year amid the slowing global economy and trade frictions.

"And I think the reforms, which have been announced, are serious reforms, ... helping get rid of at least a component of the trade frictions," Spence said on March 23 at the University of International Business and Economics in Beijing.

To tackle economic headwinds, China has pledged to deepen reforms to vitalize market entities, such as value-added tax reforms that took effect on Monday meant to lower burdens on enterprises.

Moreover, China recently adopted the Foreign Investment Law, a move aimed at building a business-friendly environment that is more integrated with the world.

Hua Changchun, chief economist at Guotai Junan Securities, said in a research note that infrastructure construction is expected to drive recovery in the second quarter, adding that full-year GDP growth may come in at 6.4 percent.