Safety has to be foundation for a good business environment 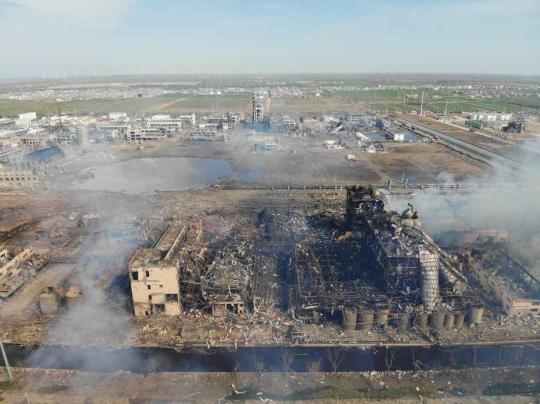 An aerial photo taken on March 22 shows the site of a factory explosion at a chemical industrial park in Yancheng, Jiangsu Province. (Wang Jing/chinadaily.com.cn)

Ten days ago, an explosion at a chemical plant in the same province razed an area of 2 square kilometers in an industrial park in Xiangshui claiming 78 lives. According to witnesses, both blasts were triggered in places where industrial waste was piled up. Both companies had bad work safety inspection records, and had been urged to plug the loopholes in their management of work safety-related issues when the two accidents happened.

Ironically, the Kunshan blast happened after the provincial authorities claimed they had drawn lessons from the Xiangshui incident, and vowed to prevent any more work safety accidents.

For a long time, Jiangsu, the second-largest provincial economy, has been known for its developed manufacturing industries, and efficient social governance. But the two serious work safety-related accidents in 10 days have taken their toll on the province's image, and exposed that its work safety system lags far behind its industrial development.

Take Kunshan for example. The work safety bureau in the small county-level city has only 70 staff members, who are responsible for ensuring the safety of thousands of enterprises. Also, as local residents told the media, the city government is obsessed with attracting investment and boosting industrial growth, and the environmental and work safety requirements are comparatively relaxed, which has long been regarded as a component of its "good business environment". The city's GDP is even higher than some provincial-level regions and its per capita GDP is over $30,000. But that comes at the cost of the environment and lives.

Now is the time for all local governments to pay the utmost attention to work safety, which means doing more than the customary campaign style movements or writing fine tickets. If all local governments require work safety to be a normalized practice, the enterprises will have no choice but to strengthen their work safety. Safety first is the basic requirement for a good business environment that should by no means be compromised for quick profits.