Made in Xiongan, for China's e-economy(2) 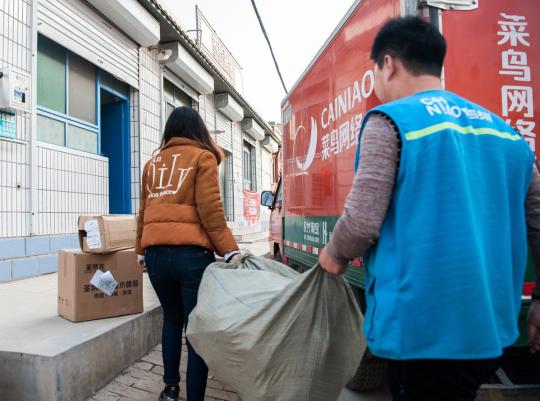 The establishment of Xiongan New Area in North China's Hebei province in April 2017 has helped increase the income of many natives like Wang.

Since 2016, he has been selling self-made lotus leaf tea and smoked fish on WeChat, China's all-in-one killer app. Initially, the online business helped him to pull in about 2,000 yuan a month.

After Xiongan was set up, he began distinguishing his products with "Made in Xiongan" on packaging labels. "It's like, Xiongan itself is a great brand and people are interested to have a taste of the food made in the new area," he said, adding his monthly income has since increased to more than 5,000 yuan.

Wang is expecting his online business to grow further as he believes Xiongan would be the front line for implementing new policies and measures.

It called for improved services for e-commerce in rural areas. One of its suggestions was to plan logistics distribution layout reasonably and drive enterprises to improve their terminal delivery services.

In Xiongan, convenient logistics infrastructure for terminal delivery has been established in some villages. Thanks to that, Wang is now able to sell his products to consumers all over the country.

According to Xiong Jian, director in charge of Cainiao's rural logistics, their network has reached more than 110 villages in Xiongan New Area, and distribution vehicles drive around 700 kilometers per day to carry goods from and to the villages.

"The logistics could only reach town level in the past, which troubled villagers whenever they wanted to dispatch or fetch goods," Xiong said.

Cainiao will continue to expand in Xiongan to cover more villages in the future because consumption in the area via e-commerce platforms has grown, Xiong said.