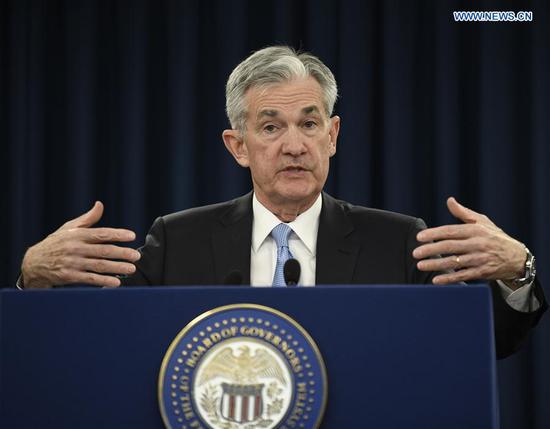 In support of the goals of fostering maximum employment and price stability, the Federal Open Market Committee (FOMC) decided to maintain the target range for the federal funds rate at 2.25 percent to 2.5 percent, the central bank said in a statement.

The FOMC, the Fed's monetary policymaking body, continues to view sustained expansion of economic activity, strong labor market conditions, and inflation near the Committee's symmetric 2 percent objective as the most likely outcomes, said the statement.

"In light of global economic and financial developments and muted inflation pressures, the Committee will be patient as it determines what future adjustments to the target range for the federal funds rate may be appropriate to support these outcomes," it said.

Addressing a press conference, Fed Chairman Jerome Powell said he and his colleagues believe that the central bank "should be patient in assessing the need for any change in the stance of policy."

"Patient means that we see no need to rush to judgment," he said. "It may be some time before the outlook for jobs and inflation calls clearly for a change policy."

Rate projections released after the policy meeting showed that 11 of the 17 officials who participated in setting interest-rate policy didn't predict any rate hikes whatsoever this year, while the rest of the six participants foresaw between one and two increases. In December, the median projection for the number of rate hikes this year was two.

Powell said the individual FOMC participants' views of the U.S. economy "point to a modest slowdown with overall conditions remaining favorable" this year.

The FOMC members "now see 2019 growth at roughly 2 percent, with the unemployment rate remaining below 4 percent," and core inflation rate, which omits the volatile food and energy prices, remains to 2 percent, he added.

Asked by a reporter if there will be a "big cut" in interest rates in the future, Powell responded by saying that the data the Fed is seeing "are not currently sending a signal that we need to move in one direction or another," reiterating that the U.S. economic outlook is positive.

The central bank chief said Fed officials are "also very mindful" of what the risks are, citing examples such as slowing global growth, uncertainties related to Britain's exit from the European Union, as well as the ongoing U.S.-China trade talks.

In a separate statement, the Fed said it intends to conclude the reduction of its aggregate securities holdings at the end of September. The process, known as Balance Sheet Normalization, started in October 2017.

The Fed's asset portfolio, as a consequence of the quantitative easing policy following the 2008 financial crisis, amounted to about 4.5 trillion dollars when the central bank began to gradually reduce it two years ago.

Powell said the balance sheet will be of a size of approximately 17 percent of gross domestic production around the end of this year, down from 25 percent of GDP at the end of 2014. In dollar terms, Powell added, "it looks like it'll be a bit above 3.5 trillion."

The Fed, Powell said, does not regard its Balance Sheet Normalization Program as a monetary policy tool. "We still think of the interest-rate tool as the principal tool of monetary policy."

"We think of ourselves as returning the balance sheet to a normal level over the course of the next six months. We're not really thinking of those as two different tools of monetary policy," he said.