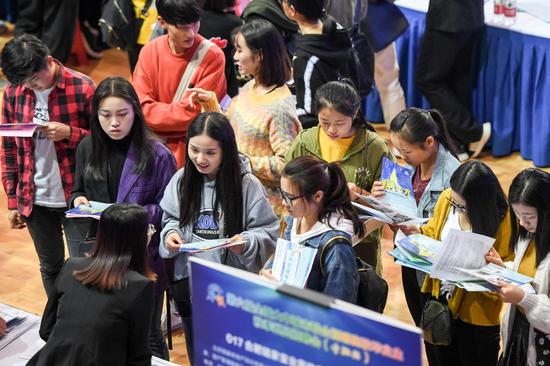 Job seekers speak with recruiters at Hefei University in Hefei, Anhui province, at a job fair for college graduates. (Photo/Xinhua)

China's job market remained stable in 2018 while demonstrating new characteristics, according to a new report.

Growing 3.9 percent year-on-year, the average monthly salary in China hit 8,096 yuan ($1,027) in the fourth quarter last year, according to a report on China's job market by Forward Intelligence, a market research institute.

Meanwhile, jobs with salaries above 8,000 yuan saw a rapid expansion in the period to account for 32.2 percent of the total, the largest share.

IT industries remained the most attractive last year, while the education and training industry replaced the internet and e-commerce industry to show the most urgent need of employees, the report said.

Thanks to the growing popularity of social networks in China, demand for employees in new media management grew 10.8 times between 2013 and 2017, the fastest pace of growth among all professions.

Also, graduates have shown growing expectations for working in the country's new "first-tier" cities such as Chengdu, Hangzhou and Wuhan, with the southwestern cities of Chengdu surpassing Guangzhou to be the fourth most attractive destination for graduates in 2019, it said.

The report attributed such changes to the remarkable economic growth and high housing and start-up subsidies in new members on the "first-tier" list.

Policy makers have taken an array of measures to ensure a stable job market, including insurance payment rebate for employers, government subsidies on skills training, and bigger tax cuts. Favorable policies were also given to people setting up their own businesses.