Leading the chase for the Chinese Dream 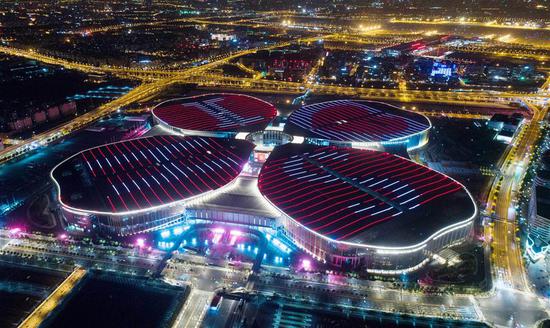 At the "two sessions" -- a key annual event on China's political calendar, an even more detailed road-map for achieving the Chinese Dream of national rejuvenation has emerged.

The almost concurrent sessions of the top legislature and political advisory body every March are a time to gauge the country's development and are being ly followed, in a world seeking certainty in uncertain times.

Last year, China's economy, the second largest in the world, expanded 6.6 percent to exceed 90 trillion yuan (13.4 trillion U.S. dollars). The growth target for 2019 was set at 6-6.5 percent, showing the economy's long-term upward trend has not changed. A country of nearly 1.4 billion people is on the fast track to socialist modernization.

The accomplishment is attributed to the leadership of the Communist Party of China (CPC) Central Committee with Xi Jinping at the core and the hard work and perseverance of the Chinese people. This is the consensus of about 5,000 lawmakers and political advisors.

President Xi, also general secretary of the CPC Central Committee and chairman of the Central Military Commission, has laid out his governance priorities and shown his strategic resolve.

He spoke about and gave policy instructions on a wide range of topics: maintaining resolve in environmental protection, sparing no effort to fight poverty, revitalizing the countryside, stimulating innovation and business activities, and boosting cultural confidence, among others.

These are issues crucial not only for China, but for other developing countries with the common desire to speed up modernization.

Jihaoyeqiu's house perches on a hill among mountains in southwest China's Sichuan Province. The region is regarded as one of the last pockets of deep poverty in the country.

China has pledged to eliminate extreme poverty by 2020. Last year, just before the Lunar Chinese New Year, Xi came to visit Jihaoyeqiu in his ramshackle home.

That scene was captured in a photo now hanging in the living room of Jihaoyeqiu's new, 100-square-meter apartment. To his delight, Jihaoyeqiu heard his name mentioned by the president in a televised New Year Speech on the eve of 2019. "The whole family clapped and cheered," he said.

The family had been relocated out of the mountains with 100 others in the village. Life improved. Jihaoyeqiu fills his storage room with snacks and beverages as he plans to set up a convenience shop. He has had his QR code ready on the door for customers to scan for mobile transactions.

Across China, more than 13.86 million poor people crossed the poverty line last year. The country's poor population shrank from 98.99 million to 16.6 million in the past six years.

UN Secretary-General Antonio Guterres said China has contributed the most in world poverty alleviation in the past decade.

Xi is the commander-in-chief for the anti-poverty fight. He has visited every single one of the 14 poorest regions. At this year's "two sessions," he made his goal clear again: "No turning back until a resounding victory."

What China is aiming for is not just freedom from poverty for its people. Democracy, the rule of law, fairness, justice, and a good environment -- a moderately prosperous society must deliver all that the Chinese people yearn for.

Clean air, safe water and uncontaminated soil are some of the most pressing matters. Xi has taken note. He demanded strong resolve in adhering to green development even amid economic difficulties.

"Don't ever toy with the idea of sacrificing the environment for growth," Xi said when deliberating with lawmakers from Inner Mongolia Autonomous Region last week. "The ecological red line cannot be crossed."

"We must grit our teeth, climb over this slope and pass this ridge," he said regarding pollution control and prevention.

Jia Run'an, a coal chemical plant manager who deliberated with Xi at the panel, said he has come to realize that with pollution left unsolved, there would be no "moderately prosperous society."

Combating poverty, pollution and defusing major risks are called the "three critical battles." The success of these battles are key to guaranteeing a moderately prosperous society can stand the test of time.

Chinese authorities have sought to address all pressing issues that concern the people -- one-fifth of the world's population, from the environment to food and drug safety, law and order, quality healthcare, good education, and affordable housing.

Over the past year, 13.61 million urban jobs were added, 14 million people got their dilapidated houses renovated, about 80 million people were eligible for personal income tax cuts, 17 cancer drugs were included in the medical insurance program and housing prices in key cities stabilized. The list even included things like toilets.

During the "two sessions," Xi asked a rural deputy in detail how the toilet upgrading has been going in the countryside.

"Do you have flush toilets or still use pits?" Xi asked.

Xi enjoys being around the people. During each of his domestic inspection tours, he visited the homes or offices of ordinary working people. He would casually appear in a crowd, stopping to speak with the people. Visiting rural areas, he would often ask people about their needs and expectations.

"Our fundamental purpose is to serve the people, focusing our efforts on meeting their aspirations to live a better life," Xi said. "The people are the foundation of the governance."

Leading the world's biggest developing country is no easy task. It is compounded by a sense of growing uncertainty in the global economy.

China faces profound changes in the external environment -- setbacks in economic globalization and challenges to multilateralism -- and the growing pains of its economic transformation.

With so much responsibility, Xi is always working hard. His schedule has noticeably grown tighter in recent months. Meeting after meeting, he gives orders on a wide spectrum of fields on the country's development.

"We are sailing through the midstream of a river where the waves are extremely rough," he said when assessing the current situation. "[We] have no choice but to power ahead."

China needs to maintain economic growth despite downward pressure while continuing its shift to high-quality development. At the same time, more needs to be done to boost people's welfare. The leadership's vision and stamina are important, and Xi has both in abundance.

Reform and opening-up is the most distinctive feature of China and the engine for China's economic miracle.

At the "two sessions," more reforms to power the country toward high-quality development were outlined.

A further 2-trillion-yuan tax cut for businesses is planned for 2019, with policies to boost the vitality of the 100-million-strong market entities, and achieve breakthroughs in core technologies for key fields, among other policy tools.

China is stimulating the consumption of the world's largest middle-income group and boosting the service sector, including elderly care and infant care.

A key issue discussed at the "two sessions" was how to boost the private sector, which supplies 80 percent of urban jobs. Last November, Xi addressed a symposium on private enterprises and reassured entrepreneurs of unwavering support, which has stabilized expectations and boosted business confidence.

Reforms need to be guaranteed by the rule of law, something the leadership has repeatedly stressed. China aims to have the rule of law basically in place for the country, the government, and society by 2035.

Protection of intellectual property rights has been strengthened. Last year, Chinese courts concluded 41.8 percent more such cases than in 2017. Among those who have been supported are copyright owners of British animation "Peppa Pig."

A draft foreign investment law, under its third reading at the national legislature, is hailed as a "landmark" legislation for China's opening-up. Once adopted, it will help create a stable, transparent and predictable market environment for fair competition, making China even more attractive to foreign investors.

The country has already climbed 32 spots on the World Bank's ranking of ease of business in its latest report. A recent survey by the British Chamber of Commerce in China showed that British businesses were "overwhelmingly optimistic" about the business prospects for their sector over the next two years. Two-thirds of the companies planned to expand investment in China.

Lin Yifu, a political advisor and former World Bank chief economist, said he would cast his "vote of confidence" for China's development.

"If handled properly, challenges can be turned into good opportunities for national rejuvenation," Lin said.

China ushered in the 2019 lunar new year with home-made sci-fi blockbuster, "The Wandering Earth," which has emerged as China's second highest grossing film just a few weeks after its debut.

The film portrays a group of Chinese who join a global collaboration to prevent Earth from crashing into Jupiter.

"The film is not about conflicts among individuals or different groups or races. It presents human beings as a whole or a community with a shared future for humanity," said Hugo Award winner Liu Cixin, who is the film's executive producer.

The concept of a community with a shared future for humanity was put forward by Xi and has won broad global recognition.

Chinese wisdom is being introduced to global governance, which maintains that the entire international community decides the rules -- It shouldn't work in a way that whoever has the bigger muscles has the [bigger] say.

The Belt and Road Initiative (BRI), six years after its inception, has a growing appeal. Over 150 countries and international organizations have signed cooperation agreements with China. Trade in goods between China and BRI partners reached 1.3 trillion U.S. dollars last year.

China has played positive roles in World Trade Organization reforms, the 2030 Agenda for Sustainable Development of the United Nations and the implementation of the Paris Agreement on climate change.

By trade, hard work and learning from others, China has helped to transform the global economy, said International Monetary Fund Managing Director Christine Lagarde, adding that China has played a significant role in boosting productivity, innovation and living standards around the globe.

Xi is leading China in its best time for development in modern times. The nation stands at a crucial juncture on the road to rejuvenation: the Chinese Dream.

Observers have said that China has taken a fast lane as it only took decades to achieve a development whirlwind that Western countries took centuries to complete.

Martin Jacques, a professor at Cambridge University, has said that China offers the world "a new possibility."

This year marks the 70th anniversary of the founding of the People's Republic of China. China aims to realize socialist modernization by 2035 and a great modern socialist country by the middle of this century.

Xi has stressed that China is still in an important period of strategic opportunity for development.

"We are all running at full speed to chase our dreams," Xi said.