Tesla gets ready for long haul 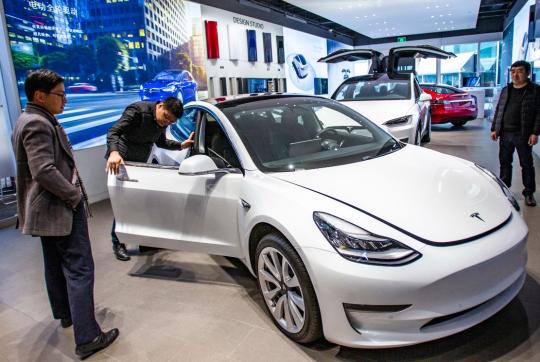 Consumers check out a Tesla electric vehicle at a dealership in Shanghai on Monday. [Photo provided to China Daily]

Tesla announced on the first day of March that it will lower prices of its eight models in China. The Model S 75D, for example, will be 11,300 yuan ($1,685) cheaper after the adjustment. The price slash for Model X P100D is the most significant at 341,000 yuan.

Tesla said that the latest price adjustments were not due to sales results. Although the exact number cannot be released, Tesla said that its sales in China in the first two months of this year have more than doubled from the same period last year. "The shift to sales online and other ongoing cost efficient policies will enable the company to lower all vehicle prices by 6 percent on average," Tesla said.

Tesla announced a 50-billion-yuan investment in its Gigafactory in Shanghai late last year. Construction of the plant began on Jan 7 and it is scheduled to start mass production by 2020, delivering 250,000 cars annually.

Li Yanwei, an analyst at the China Automobile Dealers Association, said that the lowered price of the imported Model 3 alludes to an even cheaper price when the car is produced in China. The price of its SUV Model Y will only be 10 percent higher than that of the Model 3 after the localization, which will exert pressure on high-end EV makers such as Nio and Byton.

But Tesla said in a note to China Daily that it is not its intention to compete with companies such as Nio or Byton, as their products vary from each other. But it is willing to further promote the Chinese EV sector with Chinese carmakers.

Li Bin, CEO and founder of Nio, said that Tesla's large-scale price cuts will harm the brand and Nio will not follow suit.

However, Nio's 2018 fiscal reports released on Wednesday showed that the company's net loss has increased 106.1 percent year-on-year to 3.5 billion yuan. A maximum 3,800 Nio ES8 cars will be delivered during the first fiscal quarter of this year, down 52.4 percent from the same period in 2018.

Li of CADA said the pricing of Nio cars is approaching that of Tesla. If the Chinese EV market expands fast enough, companies like Nio will hardly be affected. But if the market grows at a slower speed, Chinese EV startups will endure a huge impact, as luxury carmakers like BMW are also offering competitive products.

Yale Zhang, managing director of Shanghai-based consulting firm Automotive Foresight, agreed that the leading carmakers such as Mercedes-Benz, BMW and Audi will pose an even greater challenge to Chinese startups than Tesla in the next few years, as they enjoy better brand image and are of higher quality.

Statistics from the China Association of Automobile Manufacturers showed that 1.27 million new energy vehicles were produced in the country in 2018, up 59.9 percent year-on-year. Of these newly produced cars, the majority of 1.26 million were sold, up 61.7 percent from a year earlier.