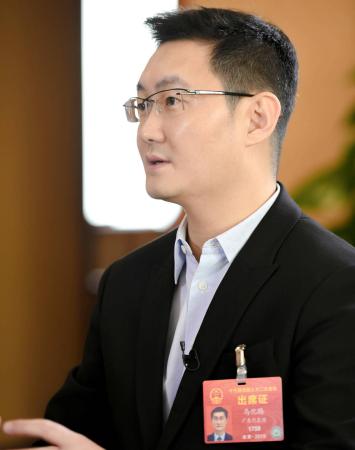 Chinese internet tycoon Pony Ma proposed building a development bank and a university for the Guangdong-Hong Kong-Macao Greater Bay Area on the sidelines of the ongoing annual two sessions in Beijing on Sunday.

Ma, Tencent's chairman and CEO, as well as a deputy to the 13th National People's Congress, raised the idea that a Greater Bay Area development bank, if possible featuring fintech, the technology used to support financial products or services, would greatly facilitate convenience and industrial upgrading among cities within the area.

"(With such convenience), we hope that more foreign capital can be attracted to invest in technology and innovative industries," he said in his proposal.

He also suggested building a Greater Bay Area university with the aim of nurturing more high-end talents to drive the region's future development.

Zhang Jun, a professor at the School of Economics at Fudan University, said: "Finance and technology determine the future of the Greater Bay Area." Like the bay areas in San Francisco and New York, the combination of the two will be a key driver of the area's economic growth, he noted.

Ma's proposal calls for more efforts to be made to support innovation, upgrade high-end manufacturing and facilitate financial services within the area.

Ma pointed out that it is crucial for China, a global manufacturing hub, to upgrade its manufacturing capability. "Therefore, it is of great significance for China to drive the industrial internet," he noted.

The industrial internet refers to the convergence of industrial systems with the power of advanced computing, analytics, and new levels of connectivity on assembly lines.

Wu Hequan, an academician at the Chinese Academy of Engineering, said that Chinese companies are expected to shift their energy to the industrial internet, after leading the world in consumer-oriented applications.

In September, Tencent undertook major restructuring and announced that it was preparing to "embrace the industrial internet". It also pledged to share its research results in the field with industrial players.

The company's cloud computing technologies and solutions, for instance, have been used to promote the digital transformation of the country's top manufacturers. This has helped traditional manufacturing firms detect malfunctions and manage equipment in real time.

With regard to Tencent's overseas business expansion strategy, Ma disclosed that smart retailing will be a priority as millions of Chinese people travel overseas and make purchases using mobile payment.

Cloud computing services can be another priority for its overseas expansion plan since more Chinese companies expanding into overseas markets are in huge demand of cloud services including supercomputing and data storage.