New tech board gets ready for launch 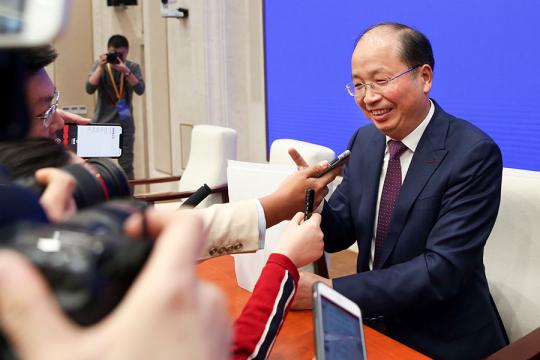 The preparation work for China's groundbreaking science and technology innovation board is in full swing, with more supporting measures in the pipeline and detailed rules to be announced soon, China's securities watchdog and the Shanghai bourse said on Wednesday.

"On the whole, related work for the new board has gone rather smoothly. And we will continue to make solid and meticulous preparations to launch this major reform in an effective way," said Yi Huiman, the newly appointed chairman of China Securities Regulatory Commission, when convening his first news conference on Wednesday.

President Xi Jinping said in Shanghai in November that China will launch a science and technology innovation board at the Shanghai Stock Exchange, which will adopt a registration-based system. Draft regulations and rules were released on Jan. 30.

Detailed rules of the new board will soon be announced and take effect, after necessary modifications in line with public opinion that was solicited based on the draft version, said Huang Hongyuan, president of the Shanghai Stock Exchange.

"We will receive listing applications after the regulations are available," Huang said. How soon the first company will go public on the new board depends on different factors, including the preparatory progress of the companies and their investment banks, he added.

Enterprises qualified and willing to go public on the new board are mainly concentrated in such areas as information technology, biomedicine, high-end manufacturing and new materials, Huang said, adding that the bourse has done lots of research on them.

"They feature relatively high research and development expenditures, and rather good growth prospects."

Dong Dengxin, director of the Finance and Securities Institute at the Wuhan University of Science and Technology, expects that both the detailed rules and the list of the first companies involved are likely to come out in March.

"China is pushing the new board forward at full speed, which can foster innovation-oriented growth through inclusive listing rules and offset this year's economic headwinds," Dong said.

Yi said the new board aims to better serve innovation-oriented enterprises and will serve as a prelude to capital market reforms of a broader scope.

The commission will carefully evaluate the effect of various reform and innovation measures on the new board. Based on that, fine-tuning measures for ChiNext and the National Equities Exchange and Quotations system can be advanced in a coordinated way, Yi stressed.

The ChiNext and the NEEQ are both existing equity trading platforms, mainly serving China's Nasdaq-style high-growth enterprises and small to medium-sized enterprises, respectively.

Li Chao, vice-chairman of the regulatory commission, said the new board's registration system will not lead to a large number of enterprises flooding onto the new board, thus avoiding hurting market liquidity. The new board will have appropriate listing standards and procedures, Li said.

"Regulators' remarks have dispelled investors' concerns that the new board may take a toll on the liquidity of existing boards," said Hong Rong, founder of Honda Education, a Shanghai-based investor education platform. "Moreover, the regulators delivered clear signals that the ChiNext and NEEQ can benefit from the reform experiences of the new board in the long term."

Regulators' remarks constitute a boost to investor sentiment on the A-share market, Hong said. "I think investors are gradually forming a consensus that the country attaches great importance on developing a strong capital market that functions well in not only financing but investing."

China's blue-chip CSI300 index had risen 22.2 percent to 3,678.39 points from the start of this year to Wednesday, and Morgan Stanley has raised this year's target for the index to 4,300 points.