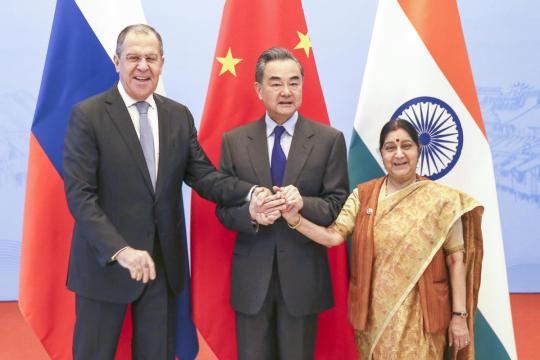 China, Russia and India agreed on Wednesday to strengthen trilateral coordination and cooperation to bring more stability and positive energy to the volatile international landscape.

The three countries agreed to firmly uphold multilateralism and the international system with the United Nations at the core, as well as the basic norms of international relations including the principle of noninterference in the domestic affairs of other countries, Wang told reporters at a joint news conference with the other two ministers after their meeting.

They agreed to intensify communication and coordination within the multilateral platforms such as the Group of 20, Asia-Europe Meeting, Shanghai Cooperation Organization and BRICS-the association of the five major emerging economies of Brazil, Russia, India, China and South Africa-to ensure the mechanisms develop in the right direction, Wang said.

While agreeing to oppose unilateralism and protectionism as well as uphold the rules-based multilateral trading system, Wang said the three countries maintain that fair competition and the principle of nondiscrimination should be upheld in the fields of information technology and cyber security.

Noting that the trilateral leaders' meeting is strategically important, Wang said the three countries proposed a summit for the leaders of China, Russia and India within this year to provide political guidance for their cooperation.

They also agreed to consolidate and expand trilateral cooperation, and study the possibility of setting up a mechanism for a regular defense ministers' meeting at a proper time, Wang added.

In terms of regional and international hot spot issues, Wang said the three countries agreed that inclusive dialogue should be the approach to resolving problems.

The three nations support the efforts of the Afghan government and its people in its peace and reconciliation process, and hope the second meeting between Pyongyang and Washington will make new progress in realizing the denuclearization of the Korean Peninsula as well as resolving legitimate concerns of the parties involved, he said.

Regarding the Venezuela situation, the three countries hold that the issue of the South American country should be resolved by its people through constructive dialogue instead of resorting to violence, Wang said, adding they oppose military intervention in the Venezuela issue.

Echoing Wang, both Lavrov and Swaraj said that, given the complex international situation, the three countries should further strengthen their coordination and cooperation in peace, security and economic development, and jointly make contributions to properly deal with regional and international problems as well as other global challenges.

Rong Ying, vice-president of the China Institute of International Studies, said in an article published in People's Daily on Tuesday that the format of a trilateral partnership has become a significant platform for the three major developing countries to carry out dialogue and cooperation.

It is hoped the format will strengthen solidarity, understanding and trust among them so as to jointly safeguard the legitimate rights and interests of the developing countries and inject stability and certainty into the changing international landscape, Rong said.