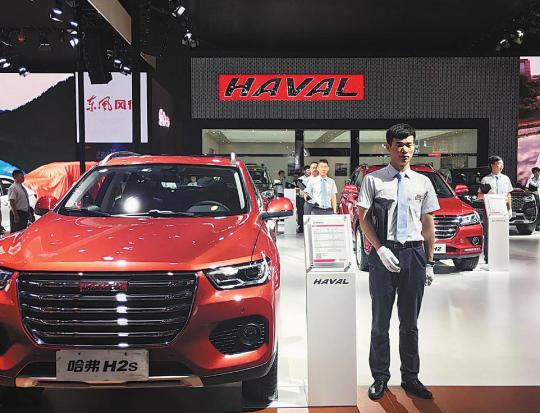 A Haval H2 model from Great Wall Motor is displayed at an auto expo in Chengdu, Sichuan province. (Photo by Li Fusheng/China Daily)

Chinese carmakers are stepping up their efforts to make forays into overseas markets in the hope of increasing their sales and bolstering their brand images amid fierce competition back home.

Great Wall Motor is investing 10 million yuan ($1.49 million) to set up a subsidiary in India, the latest move to fulfill its ambition to become the world's largest SUV producer within five years.

In a filing to the Shanghai Stock Exchange on Wednesday, the company, already the best-selling SUV maker in China, said its board of directors has unanimously passed the decision to build a wholly owned subsidiary in the Asian country.

The proposed names, which are subject to Indian authorities' approval, suggest that it will conduct sales of at least its Haval brand SUVs.

Great Wall Motor did not offer details such as the schedule or specific models involved, but the Economic Times said the operations may start around 2021.

The Indian newspaper said the carmaker had undertaken multiple studies in the last five years, saying that the significant shift toward the growing SUV segment and increased government focus on electric vehicles speeded up the decision.

Haval-branded SUVs are the cornerstone of Great Wall Motor, accounting for around 73 percent of its total sales last year.

Haval's accumulated sales have reached 5 million units, making it the most popular SUV brand for nine years in China.

But exports of Haval SUVs and vehicles of other brands at the company have been meager, with 47,000 sold last year, accounting for some 4.5 percent of its total sales.

"Going global is an inevitable trend for Chinese brands. Haval must go outside of China to become a globally competitive brand and a leading SUV brand around the globe," said Wei Jianjun, founder and chairman of Great Wall Motor, last month in Beijing.

Wei has set an ambitious goal for Haval: to scale up its annual sales to 2 million within five years and to become the No 1 SUV brand in the world. Besides India, Great Wall Motor is selling cars in a number of other countries, most of them developing or underdeveloped.

Zotye, a much smaller and less well-known Chinese brand compared with Great Wall Motor, is harboring a bigger dream: It is planning to sell in the United States beginning next year. The first model will be an SUV, and sedans and new energy vehicles will follow.

Zotye, which sold 212,000 vehicles in 2018, said the move is "an important attempt to go global and an important measure to rebuild its brand", according to the Economic Observer newspaper. The company's reputation suffers from its copycat designs.

It signed a deal late last year with California-based HAAH Automotive Holdings, which promises to sell at least 10,000 Zotye cars a year starting from 2020, according to Zotye's website.

HAAH announced in late January that it had selected 19 dealers in the US.

"These dealers are but the first of some 325 women and men in the US who will be representing our new auto brand Zotye," said Duke Hale, chairman and CEO of HAAH and Zotye USA.

"There is an affordability crisis" in the US market, said Hale, adding that Zotye will fill a void for good value at prices that Japanese and Korean manufacturers left as they moved upscale.

It is not clear whether Ford, which is planning to build electric vehicles with Zotye in China, will offer any help as it blazes its trail in the US.

Currently, analysts said, it is not easy for Chinese brands to make money in the US market, where government regulations are tough and customers are especially car-savvy. Volkswagen, which delivers more than 3 million vehicles a year in China, sold 350,000 in the US last year.

So Chinese carmakers' coveted presence there and in other developed markets such as Europe is, at least for now, more about publicity, touting their brands as having proven quality to customers in China or in less developed markets, they said.

GAC Motor, a competitive Chinese brand, has been available in some developing countries for a while. It made public its intention four years ago to sell vehicles in the US.

"It has the biggest influence on the global auto market," GAC President Yu Jun said of the US in an interview with the Detroit News during the North American International Auto Show in January.

"To enter the US, we can evaluate our own abilities and continue to challenge ourselves and strive for an even better product."

GAC announced in January that its arrival will be postponed to 2020 from this year.

"There are a lot of challenges on this journey," he said. "It is an uphill battle. We have overcome so many difficulties already. We believe American consumers will enjoy our products," Yu said.