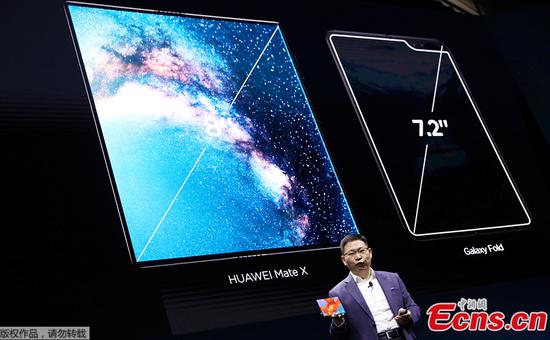 Chinese tech company Huawei on Sunday launched Mate X, a foldable 5G ready smartphone, at an event attended by around 3,000 people held on the eve of the 2019 Mobile World Congress (MWC2019) which opens here on Monday.

The Mate X has a 6.6-inch screen, which can be opened out into an eight-inch OLED screen to allow the user to read or view videos.

He said the phone was a "masterwork of engineering" and that it folded in an "almost perfect" manner, while its 5G capacity would help "change the world that we currently know".

The Mate X has a Balong 5000 processor, 8 GB of RAM and 512 GB internal memory, which Yu commented would make it the "reference point for the 5G smartphones still to come".

Other points in favor of Huawei's new smartphone are its lightness and the fact that even when folded it is only 11 millimeters thick.

Meanwhile Yu highlighted that the Mate X's two batteries give it 4,500 milliamps per hour (mAh) which is "well above that of its competitors", and these batteries can be recharged in just over half an hour.

Huawei presented several other products at the same event, including a new range of laptops: such as the MateBook X Pro, which has a 13.9, 3K screen, as well as MateBooks with 13 and 14 inch screens.

Finally, Huawei showcased its 5G CPE Pro mobile router, which is aimed at taking 5G connectivity into the home allowing for the transmission of 8K video in real time.