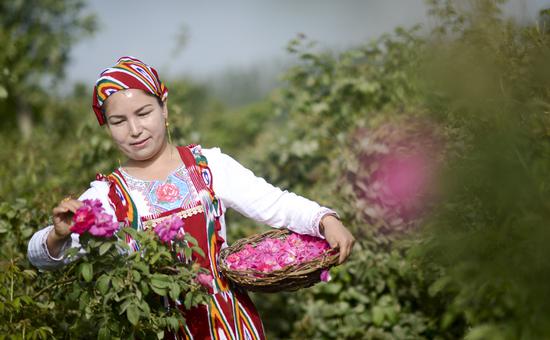 It is part of a three-year poverty-relief plan for the four regions in southern Xinjiang -- Aksu, Kashgar, Hotan and the Kirgiz Autonomous Prefecture of Kizilsu -- which are among the poorest areas in China.

Thanks to a series of job creation programs last year, the poor residents in these areas can find jobs in nearby industrial parks and "satellite factories" or migrate to larger cities in or outside Xinjiang, according to the regional department of human resources and social security.

To make them more qualified, the local government and companies have offered basic skills training courses for many job seekers.

Ahmat Abdullat was once a poor farmer in Tetir Township, Kashgar where he would make a living from growing and selling walnuts, alongside temporary work.

He took part in a training course hosted by a Shanghai-based textiles and garment enterprise at the beginning of last year. He is now a workshop safety supervisor of the enterprise and earns around 2,500 yuan (nearly 368 U.S. dollars) per month.

"This job has helped my family escape poverty," he said.

Creating jobs has been a top priority for Xinjiang officials to fight poverty. Official statistics showed that the autonomous region has helped 537,000 people shake off poverty in 2018.