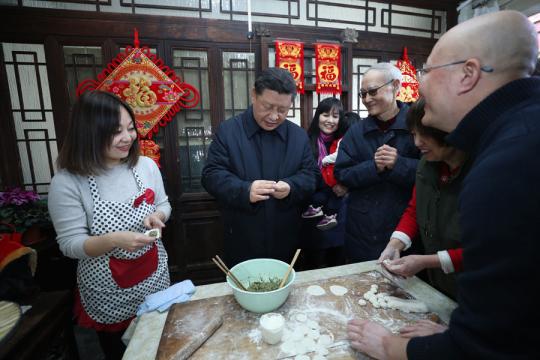 President Xi Jinping extended Spring Festival greetings to Chinese people of all ethnicities when he visited some grassroots organizations in Beijing on Friday.

While talking with delivery workers at Shitou Hutong, Xi asked about their life, praised them for their hard work and expressed greetings to the country's 3 million delivery workers.

"You are the most diligent, like diligent bees, traveling here and there and being exposed to the sun and rain. It's not easy," Xi told them.

After hearing one say that he planned to return to his hometown on Monday, the last day of the current Chinese lunar year, Xi said that he hoped all delivery workers would be able to reunite with their families during Spring Festival.

At a small restaurant that sells pancakes and noodles, Xi talked with the restaurant owners and asked questions such as how long had they worked in Beijing, how much a bowl of rice noodles costs and where they bought the ingredients for the food.

"I wish I could enjoy a meal here sometime," he said to the owners of the restaurant.

While visiting local people's homes at Caochang Sitiao Hutong, Xi participated in traditional activities such as making dumplings and extended his greetings.

At the Beijing Organizing Committee for the 2022 Olympic and Paralympic Winter Games, Xi talked with workers, athletes and coaches who were preparing for the events.

During the trip, Xi also went to the Beijing Municipal Public Security Bureau, where he had video conversations with police officers serving at their posts.

Xi has made it a habit to visit average working people ahead of the Spring Festival every year.