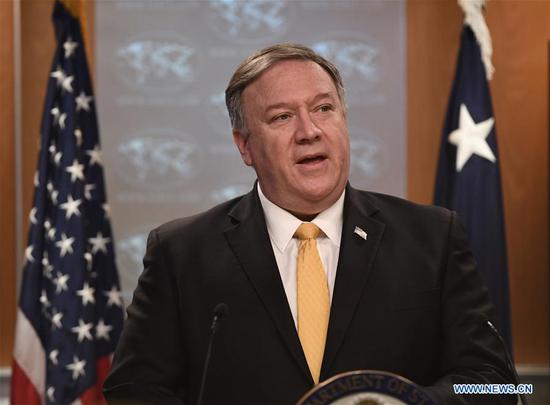 U.S. Secretary of State Mike Pompeo speaks during a press briefing in Washington D.C., the United States, Feb. 1, 2019. The Trump administration announced on Friday that the United States is withdrawing from a landmark nuclear arms control pact with Russia, a move seen as exacerbating the risk of an international arms race. (Xinhua/Liu Jie)

The Trump administration announced on Friday that the United States is withdrawing from a landmark nuclear arms control pact with Russia, a move seen as exacerbating the risk of an international arms race.

U.S. Secretary of State Mike Pompeo made the announcement at the State Department, citing Russia's violation of the deal which he believes "put the United States at a military disadvantage." Moscow has repeatedly denied Washington's accusations.

Pompeo told reporters that the United States will suspend its compliance to the treaty from Saturday, which will trigger a six-month countdown period leading to a permanent exit from the pact inked in 1987 between the United States and the then-Soviet Union.

U.S. President Donald Trump said later in the day that his country will "move forward with developing our own military response options."

The United States "will work with NATO and our other allies and partners to deny Russia any military advantage from its unlawful conduct," said Trump in a statement released by the White House.

Moscow on Friday expressed regret over Washington's intention to pull out of the treaty, calling the move a pre-decided action.

"The Americans' reluctance to hear any arguments, their reluctance to conduct any substantive negotiations, suggests that the decision to dismantle the treaty was made by Washington a long time ago," said Kremlin spokesman Dmitry Peskov quoted by TASS.

NATO backed Washington's decision in a statement released after Pompeo's remarks, urging Russia to "return to full and verifiable compliance" to the treaty.

Meanwhile, the top U.S. diplomat said Washington would reconsider its pulling-out decision in the following months if Russia could take actions toward what the United States regards as bringing the country back into compliance with the treaty.

Washington and Moscow have been accusing each other of violating the historic deal on the elimination of intermediate-range and shorter-range missiles. The agreement marked the first-ever pact reached by the two sides on nuclear disarmament and a major step forward in restricting arms race.

In early December, Pompeo sent an "ultimatum" to Moscow concerning the INF, saying that the United States would suspend its obligations under the pact in 60 days unless Russia returns to full compliance with the agreement.

Washington's latest move has generated concerns and criticism inside and outside America.

"The Trump Administration is risking an arms race and undermining international security and stability," said U.S. House Speaker Nancy Pelosi in a statement.

The administration has "yet again decided that America should go it alone, this time, by paving the way for a dangerous arms race, with costly new weapons," Senator Ed Markey said in a tweet.

"Withdrawing from the INF nuclear treaty will make the world less safe," the 72-year-old Democrat added.

Talk of a U.S. withdrawal from the treaty has caused great concern in Europe, where the result likely would be a discussion about possible nuclear rearmament. Military leaders say that would be the only way to secure a long-term balance of power and deterrence.

Many experts believe Washington's exit decision is self-centered and counterproductive, putting the whole world in an arms control crisis with the United States seeking to gain more.