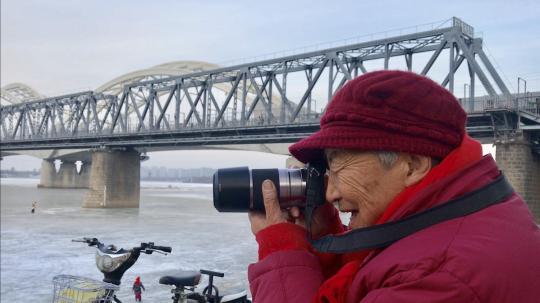 The most precious things in Zhang Ying's 40-square-meter apartment are countless photos - from monochrome to color.

She walks around Harbin, capital of northeastern China's Heilongjiang province, every day with a small digital single-lens reflex camera, taking photos of whatever she finds interesting.

Zhang's interest in photography started during a 1959 business trip to Beijing, and it made her "quite excited".

"I really wanted to record the precious journey in the capital, so I spent 60 yuan on a camera," said the retired civil servant.

"You may have no idea of the amount at that time. That was the total sum of one month's salary for me and my husband.

"My husband was angry with my 'unforgivable waste' after I returned home. To save money, I only ate some porridge for every meal for nearly a month."

However, the camera became the vehicle that started her photographic journey.

At that time, there were no digital cameras, and the cost of film became another burden.

"I took the camera wherever I went and practiced framing, but I seldom pressed the shutter," she said. "I could have a roll of film in my camera for several months, recording only the most important moments in my life."

Over the past 60 years, she has bought eight cameras and spent most of her spare time taking photos, especially after retirement in 1986.

"Digital cameras became popular around 2000 and I bought one without hesitation," she said. "I really love the feeling of pressing the shutter without any limit."

She focuses her photography on Harbin.

"Unlike other photographers, I seldom take photos outside the city," she said. "I really like recording Harbin, the city I was born in.

"The city has a long history and rich culture. My favorite shooting locations are old railway stations and former consulates."

The construction of the Middle East Railway from 1896 to 1903 brought in an influx of foreign immigrants. At the beginning of the 20th century, an open international city flourished, attracting 160,000 immigrants from 33 countries. Of these, 19 countries established consulates in Harbin.

"Some old railway stations with diverse architectural styles are gone or are quite hard to find," Zhang said. "So, after going to a town 30 kilometers away five times to locate a railway station that was out of service, I was so excited to finally find it.

"I just want to record the history and changes in Harbin, and hope my descendants can learn more from my photos."

Ten years ago, she signed up for photography lessons at the Harbin University for Seniors, becoming its oldest student.

After finishing the photography lessons, she went on to study post-processing techniques and smartphone photography.

"It is never too late to learn," she said. "I want to get more knowledge and skills about photography."

Every time she finishes a new subject, she makes a collection of the photos she has taken. She has held two photography shows.

"As her children, we become more worried about my mother's safety as she grows older," said Su Wei, Zhang's youngest daughter. "We tried to persuade her not to go too far or to wild places, but it had no effect."

In the autumn of 2014, Zhang visited a park that was under construction. When she finished taking photos, she found that the gate had been locked.

"I learned from the news that there would be dozens of famous pavilions in China rebuilt in the park," she said. "I lost myself in the park and forgot the time completely."

When she found no way out and no one to ask for help, she squeezed through a gap in the steel fence.

Su, who lives next door to her mother, said: "Every day, she goes out and seldom comes back early, even during the extremely cold winter. I can do nothing but take good care of my mother's daily life.

"On the other hand, we are happy to see her good mental and physical condition as a 93-year-old. She can get great happiness from her hobby.

"Furthermore, her photos leave our family with lots of wonderful memories."