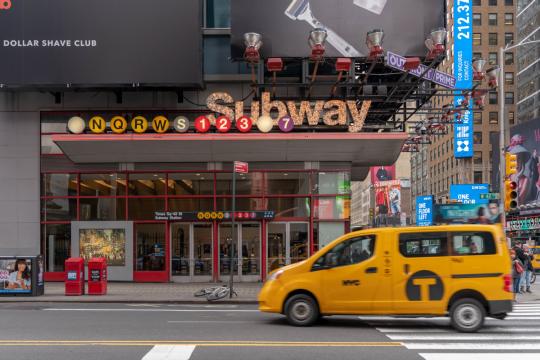 The New York metropolitan area has the busiest transit system in the United States, but delays and malfunctions have probably made its customers the nation's crankiest.

The city is home to more than 8.5 million people who travel by train, bus, automobile and plane daily.

But many New Yorkers, including several campaign groups, believe that a key part of that system－the subway－is not up to the task and want to see it upgraded.

"New York's transit system is old," said Joseph Chow, deputy director at New York University's C2SMART University Transportation Center. "Some of the newer transit systems work effectively in Asian countries－such as Japan, China and South Korea. Some parts of Europe also have good transit systems that could be used as an example on how to update New York's.

"The biggest problems for transit systems worldwide is funding. There isn't enough cash and they need more. It's a public service, so the benefits are hard to quantify.

"Another problem with New York's subway compared with others around the world is that it operates 24/7. It creates a question, 'How do you manage a continuously running system?' Not a lot of others do that. That's the difference. New York needs to build more CBTC (communications-based train control), fix operations and consider more maintenance."

But the increase has angered some cash-strapped New Yorkers who think that they are not getting value for money, as some stations are strewn with trash－which leads to track fires－and are infested with rats.

Chi John, 35, travels into the city daily from her home in Brooklyn.

"How can they justify raising fares again when the service is so bad?" she asked. "I wish they would fix the subway first－it sucks. It's always crowded and it's really slow."

One woman told Andy Byford, president of the Metropolitan Transportation Authority, at a town hall meeting, "I don't know of any business model where people can charge more money for worse service."

Danny Pearlstein, policy and communications director for the Riders Alliance, an advocacy group in New York, said: "The No 1 issue for us is to see the system modernized. It is (New York Governor Andrew) Cuomo's decision to make sure that things are done, and we're looking to him to push it through in his January budget.

"Most legislators don't take the subway, but their constituents do. We just want it to work. The subway is used by 8 million people, and it affects the lives of an overwhelming number of them, so let's get the budget in place to fix things."

Last year, Cuomo declared the MTA to be in a state of emergency, and pledged $1 billion to fix it.

Joseph L. Lhota, former chairman of the authority, said the subway is losing much-needed money to people who prefer to use ride-sharing services. This exodus resulted in subway and bus revenues being $54.8 million less than expected by August.

Cuomo and his office in Albany, the state capital, are in charge of the budget for the subway. 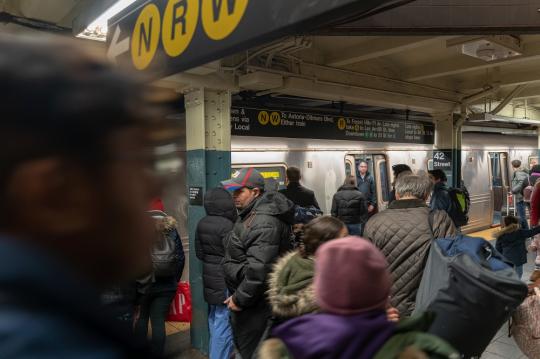 In the budget for the 2019 fiscal year, $429 million was allocated for the MTA, part of Lhota's $836 million action plan announced in 2017 to "stabilize and improve the subway system".

At least $418 million of the money for that plan will come from the state. The city has been forced to pay the other half despite objections from New York Mayor Bill de Blasio.

Even with a cash boost, the MTA has been "bleeding money".

The agency predicts that next year it will be running a budget deficit of about $500 million, which will rise to $990 million in 2022.

John Raskin, head of the Riders Alliance, told The New York Times in November, "Riders have been paying more every two years for almost a decade, but in that time, public transit service has deteriorated."

The MTA blames fare evaders for lost revenue, saying that 208,000 people cheat the system each day by not paying for their journeys. (This is usually done by jumping over or sliding under turnstiles, or sneaking through open emergency doors.)

Fare evasion cost the MTA $215 million last year, according to an authority report.

On buses, at least 348,000 people dodged fares in 2017 by boarding through side doors, costing the city $119 million. The problem was worst in The Bronx and on Staten Island, the MTA said.

The decision by Manhattan District Attorney Cyrus Vance Jr. to stop prosecuting fare evaders has been another drain on the subway's cof-fers, according to MTA board member Larry Schwartz.

"The problem is people are not paying, and that is not fair to those who are," Schwartz said. 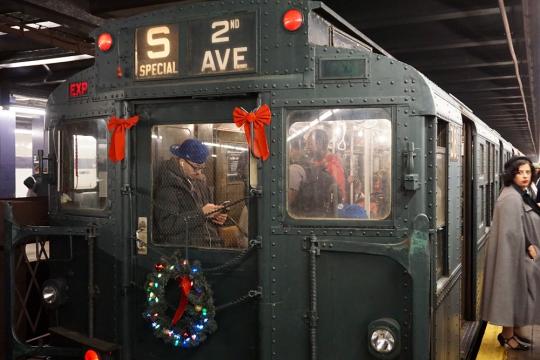 A special train runs through Manhattan ahead of the New Year. [ZHANG YU'AN/CHINA DAILY]

Meanwhile, the 250,000 daily commuters who use the L train, a lifeline for Williamsburg, Brooklyn, had feared that it would be closed for 15 months from April for construction work. However, Cuomo said on Jan 3 that new technologies and materials will allow the line to keep operating while workers fix damage caused by Hurricane Sandy.

Cuomo said engineers would use a new technology from Europe to make critical repairs to the tunnel's two tubes, starting to rectify damage from Hurricane Sandy's floodwaters in 2012. Work will be carried out at night and at weekends.

Many Brooklyn residents had rearranged their lives in anticipation of a shutdown that would have cut their main route to Manhattan. Some moved elsewhere and some even sold their apartments.

While subway users complain about their journeys, passengers who travel to the city's airports say they do not have it any better.

The borough of Queens is home to New York's two major airports－LaGuardia and John F. Kennedy.

He said in 2014, "If I blindfolded you and took you to LaGuardia Airport ... you'd think, 'I must be in some third-world country'."

But in June 2016, he commended a $4 billion redevelopment project for the airport at a groundbreaking ceremony.

The Cuomo administration plans to give LaGuardia an $8 billion face-lift. The governor has ordered lighting, terminal buildings and parking facilities to be upgraded.

He also signed legislation in June to advance talks on building a new $1.5 billion AirTrain to LaGuardia. Such a service already operates at JFK Airport.

The governor predicted that journey time from midtown Manhattan to LaGuardia would be 30 minutes by AirTrain, instead of 35 minutes by car.

"The new LaGuardia Airport will provide an improved customer experience with better access to airlines and public transportation for all passengers－essential to the airport's transformation," Cuomo said in a statement.

The 2.4-kilometer-long AirTrain route is due to be completed in 2022 and will run between the Long Island Rail Road station and the A subway line.

However, the Long Island Rail Road, like much of the MTA's services, rankles with passengers because of widespread delays. In January last year, it posted its worst annual on-time report in 18 years. The railroad carried 89.3 million people in 2016, a record. 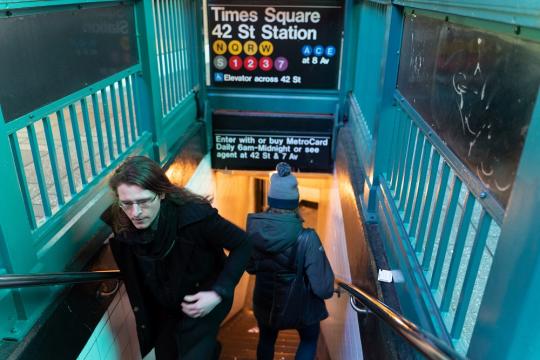 Carlton Gordon, 61, who commutes to Brooklyn from Long Island, said, "I prefer to drive and not take trains, because they're always late."

A host of signal problems and broken crossing gates led Philip Eng, president of the LIRR since April, to promise improvements in August.

Under Eng, punctuality improved in April, May and June compared with the same months last year, according to a report from the LIRR.

The MTA also operates Metro-North trains to Westchester and Connecticut, and this system has been plagued with delays and circuit problems.

There have been two fatal crashes involving Metro-North trains in recent years. In 2013, two trains collided in The Bronx, injuring 60 people, while in 2015, six people died and 12 were injured in a derailment on the Harlem line.

Byford, the MTA president, has been hailed as a "Mr. Fix-It" for the subway since taking office in January last year. Originally from the United Kingdom, he proposed $40 billion worth of reforms in his "Fast Forward" plan.

One of Byford's major objectives is for trains to travel faster.

Last month, he raised the speed of trains on the N and R lines from 24 kilometers per hour to 48 k/ph. A deadly crash in 1995 had resulted in the lower speed limits.

Byford's team is also fixing 267 faulty signals, which slow trains. About 30 have already been repaired in Brooklyn.

Pearlstein, of the Riders Alliance, said: "He (Byford) has experience fixing transportation on three continents. He is the right man for the job." 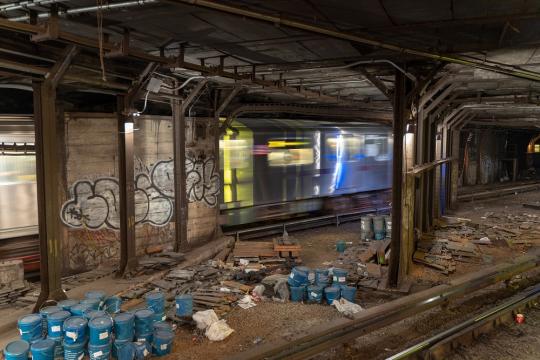 Another plan championed by the governor is to implement a street congestion fee and use revenue from this to update the subways and railroad systems.

This fee was due to start on Jan 1 for taxis in Manhattan, but has been temporarily blocked by a judge. It is projected to raise $400 million a year for the MTA.

The Manhattan congestion fee－if it goes ahead－will be in effect 24 hours a day and cost passengers $2.50 when they hire a taxi in the most congested parts of the city starting on West 60th Street and below. Passengers who use Uber or Lyft services will pay $2.75.

A spokesman for Uber said: "Uber will comply with the law and implement the $2.75 fee. The state law says it must be passed along to riders. Drivers will not pay the fee."

Transportation Alternatives, a group that wants fewer automobiles on the roads, said the fee is a positive development and hopes it will prevent more accidents, which last year killed 214 pedestrians, motorists and cyclists in the city.

Joseph Cutrufo, a spokesman for the group, said: "Putting a price on driving in one of the most congested parts of New York City will be a net plus for the streets. It will make them safer and saner, and we expect that it will serve New Yorkers well."