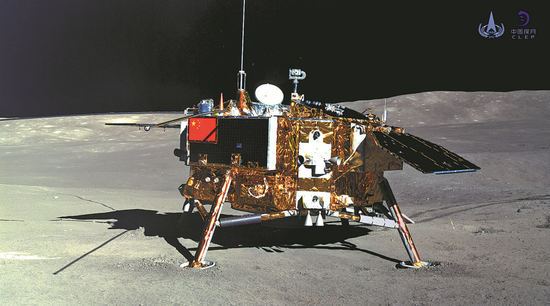 Photo taken by the rover Yutu-2 (Jade Rabbit-2) on Jan 11, 2019 shows the lander of the Chang'e-4 probe.(Photo/Xinhua/China National Space Administration)

China plans to send its Chang'e 5 probe to the moon around the end of the year and bring lunar samples back to Earth, a senior space official said.

Wu Yanhua, deputy head of China National Space Administration, said at a news conference in Beijing on Monday afternoon that the Chang'e 5 mission will be the next step in China's lunar exploration and will mark the completion of the program's third phase, whose goal is guiding a probe carrying lunar soil back to Earth.

The country's first Mars mission is scheduled for around 2020, he said.

If Chang'e 5 succeeds in its mission, China will become the third nation to retrieve lunar samples, after the United States and Russia.

According to sources close to China's lunar program, Chang'e 5 will be launched on a Long March 5 heavy-lift carrier rocket at Wenchang Space Launch Center in Hainan province.

They will make a soft landing and get to work on tasks such as drilling to collect underground rocks and gathering soil with a mechanical arm.

When the surface operations are completed, the ascender's rocket will return it to lunar orbit, where it will dock with the re-entry module. The samples will be transferred to the module, which will carry them to Earth. The samples will be distributed among scientists for research, according to sources.

After Chang'e 5, China has plans for Chang'e 6, 7 and 8 missions, Wu said. Chang'e 6 is intended to land on the moon's south pole, he said, and return with rocks and soil.

Chang'e 7 will investigate the south pole, and Chang'e 8 will be tasked with verifying advanced technologies that may be applied in future lunar expeditions, including a possible lunar scientific base.

Regarding the ongoing Chang'e 4 mission, the official said the lander and the Yutu 2 rover have entered a planned dormancy period as the far side of the moon goes through a two-week lunar night. When it awakes, Yutu 2 will move northwestward to continue its survey, he said.