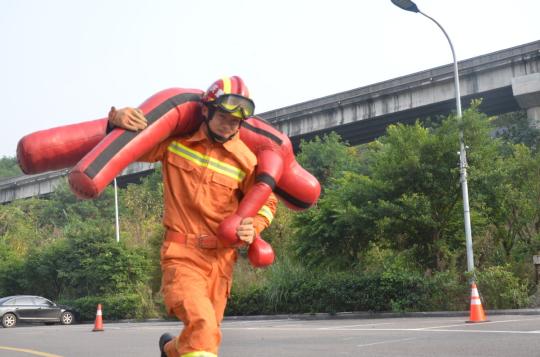 Zeng Linghua, 22, a firefighter from Southwest China's Chongqing, competes at a recent firefighter competition among ASEAN countries in Nanning, capital of South China's Guangxi Zhuang autonomous region. He won two titles at the match despite injuries. (Photo provided to chinadaily.com.cn)

The match attracted over 200 firemen from member countries.

Due to intense training, Zeng suffered a bone fracture in his left knee and serious thigh muscle strain before the match. But he did not give up. With some medical treatment, he gave it his best to excel in the 60-meter race while carrying a ladder on his shoulder and the indoor firefighting competition.

Zeng joined the fire brigade in Chongqing's Beibei district in 2014 and has participated in over 800 firefighting rescues so far. He said a disaster inspired his choice of profession.

"When I saw the brave firemen rescuing people during the 2008 Sichuan earthquake, I decided to become one of them," he said.