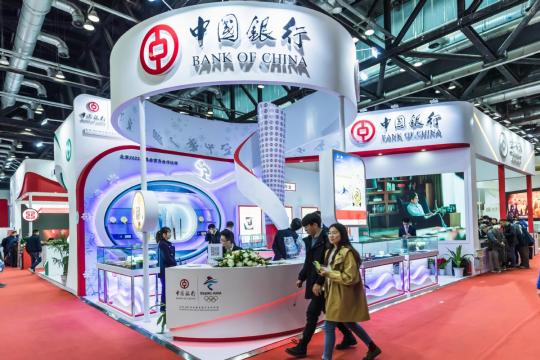 Visitors walk past the stand of Bank of China during a financial exhibition in Beijing. (Photo by Zhan Min/for China Daily)

Chinese banks should shift their focus from expansion to providing real economic value so they can seek higher quality growth, said experts from global market consultancy McKinsey and Co in a banking industry report.

McKinsey estimated the 40 largest Chinese banks will see their combined profits before tax reach over 2.2 trillion yuan ($319 billion) this year, based on their mid-year fiscal reports and 2017 performance.

The banks' risk-adjusted return on capital will hit 19.1 percent, up 2.1 percentage points from the previous year.

With an estimated annual profit of about 151 billion yuan, China Construction Bank will, for the first time in the past four years, become the most profitable Chinese bank this year, according to McKinsey.

Tian Guoli, chairman of China Construction Bank, said that the larger banks in China used to be overly reliant on scale to gain market dominance. But in the future, the winner will be the bank that can differentiate its services from its competitors.

To that end, China Construction Bank said it will attach more importance to small companies and emerging industries, as it believes the sectors promise huge potential.

But, McKinsey pointed out 14 banks will report losses this year.

Although the losses have narrowed from the 20 banks that reported losses in 2017, it cannot be denied that Chinese banks' profitability needs to improve, Qu said.

"One of the three major challenges is banks' declining income, due to lower margins after the liberalization of interest rates. Banks need a new driver for their profit growth," he said.

Meanwhile, many banks' growth came from asset growth in the past, meaning their business is driven by growth in loan issuance. As such, it will be difficult for them to transform into a light-asset model in the short term, Qu explained.

Tightening regulatory supervision and contracting financial leverage have resulted in limited capital supply. In this sense, most banks cannot support their previous growth models, which were dependent on large amounts of capital, he said.

But, Qu added, there will be major mergers and acquisitions in the second half of next year, with M&A remaining the theme for the Chinese banking industry for the next three to five years.

A Fitch Ratings survey predicted that the Chinese banking industry will remain stable in 2019. But the lack of capital, lack of profitability and stricter supervision will pose challenges for certain banks.