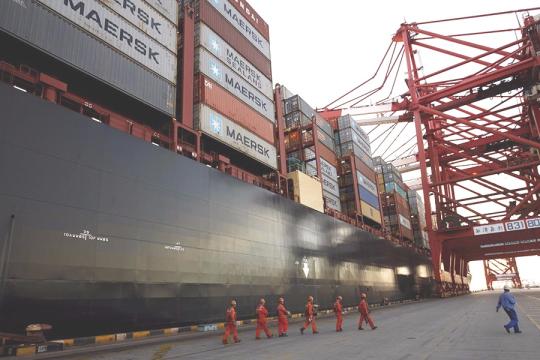 Port employees walk past a container vessel in Shanghai. (Photo/Xinhua)

China will adjust duties on 706 import items from aircraft engines to pianos and baby's diapers from next year, the Ministry of Finance announced on Monday.

To actively expand imports, reduce institutional costs and advance supply-side structural reforms, China will implement a tentative import tax rate on these goods and commodities, from Jan 1, 2019, the ministry said in an online statement.

The country will introduce zero tariffs on miscellaneous meal and some raw materials for the production of pharmaceutical products, remove the provisional import tax rate for imports of lithium-ion battery monomers for new energy vehicles and resume the implementation of the most favored nation tariff rate.

Eager to encourage imports of advanced equipment, key machine components and raw materials, China will continue to implement a lower provisional import tax rate on advanced equipment such as aircraft engines, welding robots for automotive production line and other resource products such as natural forage and uranium, according to the item list for tariff cuts.

Significantly cutting or scrapping import tariffs for items such as aquatic products and daily consumer goods is conducive to expanding China's opening-up and serves as a major measure and action in the country's move to further open its market, said Li Guanghui, vice-president of the Chinese Academy of International Trade and Economic Cooperation.

"It will help the country meet increasing domestic demand, achieve balanced trade and share development dividends with the rest of the world," he said. "Widened access for foreign goods will allow domestic consumers to enjoy more quality products and prompt Chinese companies to improve their competitiveness."

China has been the world's second largest importer of goods for nine consecutive years, and took 10.2 percent of global imports last year. The Chinese government expects the country to import goods worth $24 trillion in the next 15 years, according to the information released by the Ministry of Commerce.

Consumption has contributed 78 percent of the country's economic growth in the first three quarters of the year, and about 400 million middle-income earners are seeking more imported high-quality goods and services, according to data released by the ministry.

To boost the development of the Belt and Road Initiative and pilot free trade zones, China will also apply conventional tariffs on products from 23 countries and regions such as South Korea, Australia and Peru in line with their trade pacts in 2019, the Ministry of Finance said.

To meet the needs of its export management system reform and promote the operational efficiency of the energy sector, the ministry also announced that China will stop levying tariffs on 94 commodities such as fertilizers, apatite, iron ore, slag, coal tar and wood pulp, from Jan 1.