Use of kerosene allows it to fly higher, be plateau combat ready 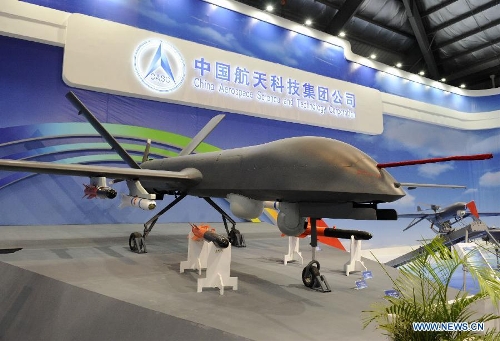 The Chinese CH-4, one of the best-selling armed reconnaissance drones on the international market, will be fitted with a new and stronger engine that would allow it to fly higher than the world's highest peak.

The CH-4 will soon see its old piston engine that burns gasoline replaced with a domestically made next-generation heavy-fuel engine that burns kerosene, a spokesperson of the Chinese Academy of Aerospace and Aerodynamics (CAAA) under the China Aerospace Science and Technology Corp (CASC), the drone's manufacturer, told the Global Times on Tuesday.

The exact date for the upgrade and the new designation for the new version will be announced at a later date, the CAAA spokesperson said.

The heavy-fuel engine will allow the drone to reach a height of 9,000 meters, according to a Monday report on the WeChat public account of Ordnance Industry Science Technology, a Xi'an-based periodical on national defense industries and technologies. That is even higher than Mount Qomolangma, known in the West as Mount Everest, which is 8,844 meters high.

With the old piston engine, the CH-4 can only reach 7,200 meters high, the report said.

Being able to fly higher means the drone is less likely to be detected and hit by a surface-to-air missile and more capable of combat in plateau regions, military experts said.

Fu Qianshao, a Chinese air defense expert, told the Global Times on Tuesday that by switching from gasoline to kerosene, the new engine will open the door for the CH-4 to operate on large vessels.

Gasoline is volatile and may lead to fire accidents, which is especially dangerous at sea, which explains why gasoline is not allowed on military vessels, Fu said. Heavy-fuel like aviation kerosene is much safer, he said.

The new engine can also reduce the fuel consumption by 20 percent compared to the old one, and significantly shorten the takeoff ground run distance, Ordnance Industry Science Technology reported.

With CAAA's new armed reconnaissance drone on the market, the new domestic engine will help the CH-4 in terms of combat capability as the drone will also see a further price reduction following mass production, the report said.

The CH-4 has become one of the best-selling drones on the international market, the report said.

Many countries, including Algeria, Iraq, Egypt, Saudi Arabia and the UAE are operating the CH-4, Jane's Defence Weekly reported.

At Airshow China 2018 in Zhuhai, South China's Guangdong Province in November, the CAAA revealed the latest additions to the CH drone series: the flying-wing stealth combat drone CH-7 and the tilt-rotor drone CH-10.