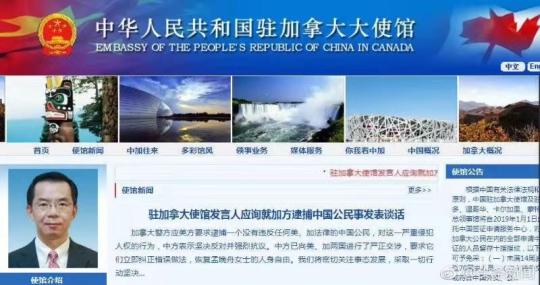 The Chinese embassy in Canada on Wednesday voiced its "firm opposition" to the reported arrest of Meng Wanzhou, chief financial officer of China's Huawei Technologies.

The Canadian police, at the request of the U.S., arrested a Chinese citizen who did not violate any U.S. or Canadian laws, the embassy said in a statement posted on its official website.

"The Chinese side expressed firm opposition and strong protest against such gross violations of human rights," it said. "The Chinese side has made solemn representations to the United States and Canada, demanding that they immediately correct the wrongdoing and restore the personal freedom of Ms. Meng Wanzhou."

The embassy said it will pay close attention to the development of the case and take every action to resolutely safeguard the legitimate rights and interests of Chinese citizens, according to the statement.

"The company has been provided very little information regarding the charges and is not aware of any wrongdoing by Ms. Meng," Huawei said in a statement, "The company believes the Canadian and U.S. legal systems will ultimately reach a just conclusion."

Canadian authorities said on Wednesday that they have arrested Meng for possible extradition to the United States, The Associated Press reported. It cited Canada's Justice Department spokesman Ian McLeod as saying Meng was detained in Vancouver, British Columbia, on Saturday.