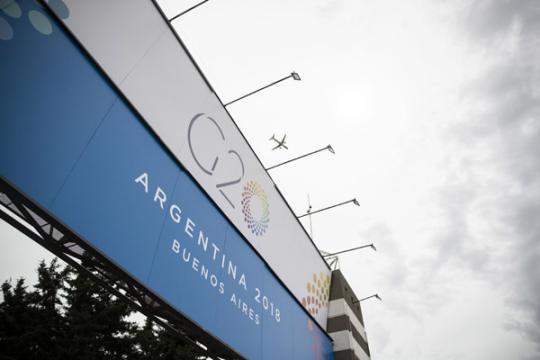 A plane flies above the Costa Salguero Center in Buenos Aires, Argentina, on Nov. 27, 2018. (Photo/Xinhua)

President Xi Jinping called on the Group of 20 countries on Saturday to stay committed to open, inclusive and rules-based international trade so as to allow the G20-a major forum for global economic governance-to play a key role in creating a favorable environment for international trade.

Xi spoke at the plenary session on the second day of the G20 Leaders' Summit, which wrapped up in Buenos Aires, Argentina, on Saturday with a declaration on building a consensus for fair and sustainable development.

He also called on the G20 nations to join hands to deal with climate change, noting that it presents a major challenge for humanity.

The event came at a time of growing international concern over issues resulting from rising unilateralism and protectionism, so trade was a central topic.

Xi said G20 members should uphold free trade and expand the opening-up of their markets to seek win-win cooperation by leveraging their respective strengths and complementarities. They should work to expand international trade to allow economic globalization to benefit more countries and peoples, he said.

A rules-based trading system must be upheld to ensure that international trade enjoys a stable and predictable institutional environment, Xi said.

Regarding climate change, Xi said G20 members should bear responsibility for building a community with a shared future for mankind and provide political impetus for international cooperation in coping with climate issues.

He called on countries to honor their commitments in the United Nations Framework Convention on Climate Change as well as the Paris Agreement, strengthen their actions in response to climate change before 2020 and promote global low-carbon transformation.

Developed countries should adhere to their commitment to transfer advanced technologies to developing countries to help them build capacity for dealing with climate change, Xi said.

China is ready to work with countries to translate into reality the principle of "common but differentiated responsibilities" and respective capabilities, in light of different national circumstances, as written in the Paris Agreement, Xi said.

The G20 leaders recognized at the event that some of the key risks, including financial vulnerabilities and geopolitical concerns, have partially materialized, according to the leaders' declaration. They renewed their commitment to work together to improve a rules-based international order capable of effectively responding to a rapidly changing world.

The leaders also recognized the contribution that the multilateral trading system has made in promoting international trade cooperation, and they support the necessary reform of the World Trade Organization to improve its functioning.

Signatories to the Paris Agreement, who also have joined the Hamburg Action Plan, reaffirmed that the agreement is irreversible and they are committed to its full implementation, the declaration said.