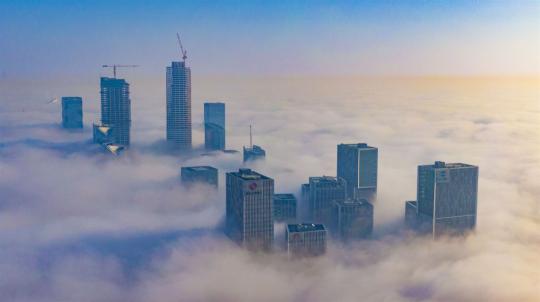 High-rises are shrouded in fog in Nanjing, Jiangsu province, on Tuesday. (Photo/CHINA DAILY)

Hebei Province is seeing the most serious air pollution since the onset of winter weather, with the density of pollutants soaring to a high level, the province's air monitors said on Tuesday.

This round of air pollution began on Friday and is expected to end on Monday, lingering longer than the previous three rounds since October, according to the Hebei Environmental Emergency and Heavy Pollution Warning Center.

Locked in by a stable atmosphere, high humidity and a temperature inversion, air pollutants have accumulated. The density of PM2.5－hazardous particulate matter smaller than 2.5 microns in diameter－increased gradually, it said.

The maximum hourly concentration of PM2.5 climbed to 494 micrograms per cubic meter at 6 pm on Monday in Baoding, Hebei, about 140 kilometers southwest of Beijing.

Dust from blowing sand on Monday also raised the level of PM10－particles smaller than 10 microns. Concentrations soared to 705 micrograms per cubic meter in Zhangjiakou, about 160 kilometers northwest of Beijing.

Air humidity will gradually increase starting on Wednesday and continue until Monday, when a cold front will disperse the smog.

"Because of the unfavorable weather conditions for dispersal of pollutants, air pollution this winter will be more severe than the same period last year," said Wang Xiaoli, head of the center.

The province issued an orange alert－the second-highest level in a four-tier system－on Thursday and launched a second-level emergency response, under which about 35,000 polluting companies are required to suspend production in order to lower emissions.

The emissions of major contributors to air pollution－sulfur dioxide, nitrogen oxide and particulate matter－should be cut by 20 percent, and volatile organic compounds, or VOCs, by 15 percent, the center said.

Meanwhile, in the southern part of the country, heavy fog hit many parts of the Yangtze River Delta region starting on Monday night, forcing the closure of several freeways, as well as flight cancellations on Tuesday.

The National Meteorological Center issued an orange alert for fog on Tuesday, saying that visibility in some parts of Jiangsu, Anhui and Zhejiang provinces had been reduced to less than 50 meters.

In Jiangsu, the low visibility led to the shutdown of all freeways inside the province between Monday night and Tuesday morning. Nanjing Lukou International Airport in the provincial capital was also affected. China Eastern Airlines said at least 40 flights were canceled on Tuesday.

Shanghai also issued a yellow alert for fog on Monday night, and some suburbs later upgraded the alert to orange. At least six flights were canceled at the city's two airports on Tuesday.

"The foggy weather is the result of a radiative cooling phenomenon in an air mass containing high water vapor," said Fu Yi, chief service officer at the Shanghai Meteorological Service.

Fu said the phenomenon is common between October and March or April, and the impact will be more pronounced during static and stable weather, as in recent days.

"The fog might continue to appear at least in the morning on Wednesday and Thursday in Shanghai," Fu said.

The National Meteorological Center said that Anhui and Jiangsu might be hit by a mixture of fog, smog and dust on Wednesday.