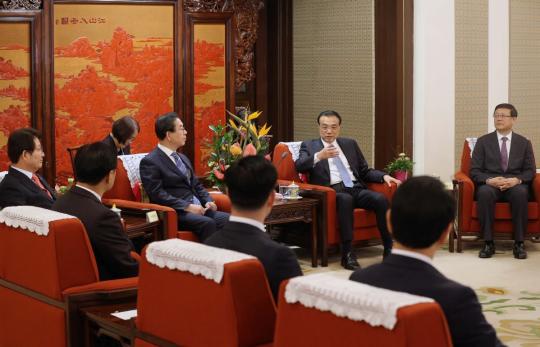 Premier Li Keqiang meets with participants in the second governor meeting between China and the ROK in Beijing on Tuesday. (WU ZHIYI/CHINA DAILY)

Premier Li Keqiang called for the long-term healthy development of relations with the Republic of Korea and the United Kingdom during meetings with guests from the two countries.

On Tuesday afternoon, Li met with 17 participants in the second governor meeting between China and the ROK.

The premier said China and the ROK have continued their stable development of ties with the steady promotion of exchanges at the local level and other areas. Bilateral trade and investment has increased rapidly, with huge potential yet to be tapped, Li said. China is willing to work with the ROK for the long-term healthy development of relations, he said.

Li said the event made positive achievements, in particular in people-to-people exchanges and environmental protection, showing the strong will and potential for cooperation between local governments.

The premier called for the use of mechanisms, such as the governors' meeting, to learn from each other and contribute to the development of bilateral ties.

Representatives of the ROK said China's achievements over the past 40 years of reform and opening-up are not only beneficial to the world's second-largest economy but also help boost peace and prosperity in Northeast Asia. The ROK is willing to boost trade, investment and people-to-people exchanges, as well as to strengthen cooperation between governments in the neighboring countries and make new contributions to bilateral ties, they said.

The event was sponsored by the Chinese People's Association for Friendship with Foreign Countries and the Governors Association of Korea. The first such event was held in Seoul in June 2016.

Li said China is willing to work with the UK in boosting cooperation in key areas, such as the financial sector, and to firmly safeguard rules-based multilateralism and free trade.

Li said Cameron's endeavors as prime minister to promote bilateral relations and cooperation are appreciated and China would like to deepen cooperation with the UK in trade, economy and the financial sector, under the principles of mutual respect and equal treatment.

The UK and the European Union recently reached an agreement on Brexit negotiations. The UK and EU are two vital partners for China, which would like to see both of them be peaceful, stable, prosperous and open, Li said. China will promote the healthy development of relations with the UK and the EU, and safeguard multilateralism and free trade, he said.

Cameron said UK-China cooperation has been deepened with two-way investment and trade rising continuously. The UK will continue to firmly support rules-based multilateralism and free trade, he said.