China-Spain ties at a glance

President Xi Jinping starts his three-day state visit to Spain on Nov 27 at the invitation of King Felipe VI of Spain.

Xi's visit to Spain, the first state visit to the country by a Chinese president in 13 years, falls on the 45th anniversary of the establishment of diplomatic ties between the two countries.

During his visit, Xi will exchange views with Spanish leaders so as to further develop the China-Spain comprehensive strategic partnership, promote the docking of the development strategies in the framework of China's Belt and Road Initiative, and strengthen bilateral cooperation in various fields, Chinese Ambassador to Spain Lyu Fan told media.

Let's take a look at some highlights of high-level exchanges, pragmatic cooperation and people-to-people exchanges between the two countries. 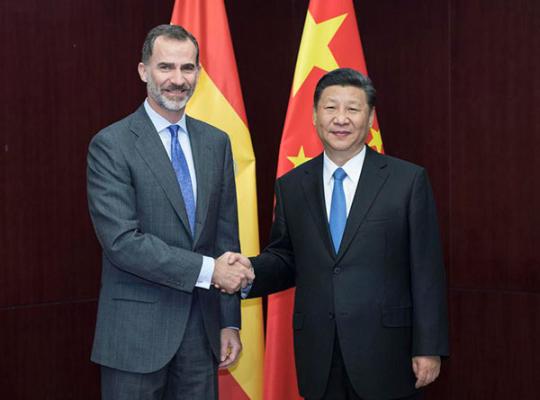 Diplomatic relations between China and Spain were established on March 9, 1973.

The comprehensive strategic partnership between the two countries, established in November 2005, has continued to deepen and exchanges and cooperation also have expanded.

On June 9, 2017, when meeting with Spanish King Felipe VI in Astana, Kazakhstan, Xi said that China and Spain should make full use of the China-Europe rail line, connecting Yiwu city in East China with Madrid.

The Spanish king also expressed his willingness for strengthening political trust, deepening high-level exchanges and enhancing practical cooperation in all areas with China.