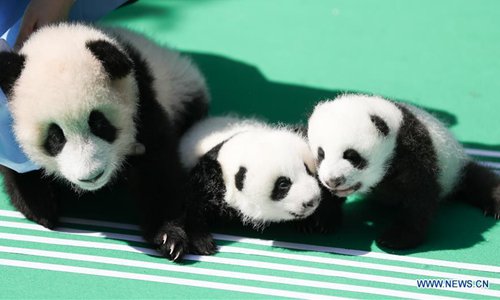 Photo taken on Sept. 28, 2018 shows giant pandacubs at Chengdu Research Base of Giant Panda Breeding in Chengdu, capital of southwest China's Sichuan Province. A total of 12 cubs born in the base in 2018 met the public here. Photo: Xinhua

Can sexually apathetic pandas get a chance to have more babies?

Experts at the Research Base for Qinling Giant Panda Breeding, Shaanxi Province discovered how to detect the panda's reproductive hormone, mastered the key technology of insemination and breeding the cubs, according to a document sent by the Forestry Department of Shaanxi Province to the Global Times on Thursday.

They are breakthroughs in the artificial breeding of the animal, which may greatly help them mate, get pregnant and help cubs to survive.

The province has now successfully bred 19 pandas, and the number of captive pandas in this province has reached 22.

Giant pandas have a low fertility rate due to their sexual apathy. Female pandas become pregnant only once a year and deliver at most three cubs, Zhao Huawen, founder of Eudemonia Bank, an organization based in Chengdu dedicated to protecting the panda's habitat, told the Global Times on Thursday.

He added that the best time for a giant panda to get pregnant usually lasts one to three days every year.

In August, the world's only artificially bred brown giant panda, 9-year-old Qizai, was set up by the breeding base to mate with Zhuzhu, an 18-year-old female panda, the Xinhua News Agency reported. However, the two pandas tried several times but eventually failed to copulate.

Qizai's semen was taken in 2017 for artificial breeding, but no offspring has been generated. His semen was used in artificial insemination with four female pandas at the base in 2018.