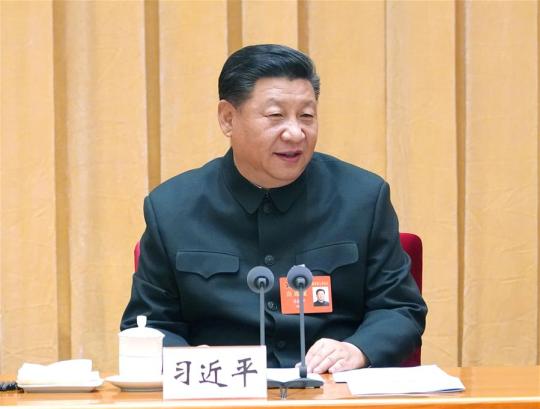 President Xi Jinping, also general secretary of the Communist Party of China Central Committee, chairman of the Central Military Commission (CMC) and head of a CMC leading group for deepening reform on national defense and the armed forces, attends and addresses a CMC meeting on the reform of policies and institutions in Beijing, capital of China. The meeting is held in Beijing on Nov. 13 and 14. (Photo/Xinhua)

The Chinese military will reform the way it makes policy by 2020 and establish a robust socialist system of military policy with Chinese characteristics by 2022, the Ministry of National Defense said on Thursday.

On Wednesday, President Xi Jinping called for the People's Liberation Army to reform the system by which it makes policy to improve its combat capabilities and become a world-class force.

Xi, who is also general secretary of the Communist Party of China Central Committee and chairman of the Central Military Commission, said a systematic and deep reform is urgently needed to resolve deeply rooted issues within China's military policymaking system.

The reforms should help stimulate enthusiasm, initiative and creativity among military personnel, he said. Reform measures include establishing regulatory mechanisms for joint operations, improving combat readiness and setting up a modern institution to govern the use of the nation's military forces.

Xi also said the military's human resources system should be optimized, including raising pay and improving benefits for military personnel.

The policymaking changes are a crucial part of China's effort to deepen military reforms and to ensure the Party's absolute leadership over the military, Senior Colonel Wu Qian, a ministry spokesman, said at a news briefing in Beijing.

They also have profound significance in achieving the Party's goal of building a strong military and realizing the great rejuvenation of the Chinese nation, Wu said.

The reforms are the fruit of extensive research spanning more than a year and involving various military institutions and active and retired military personnel, Wu said, adding that more than 60,000 active and 2,800 retired service members had participated in the reforms' formation.

"It is a straightforward, comprehensive and applicable plan that has drawn wisdom from the entire military," he said.

The reforms will also build a fair and just institutional environment that can ensure the basic needs of military personnel, protect their interests and increase their sense of pride and accomplishment.

The new environment will allow the military to enhance evaluations, upgrades and development of future military policies, allowing it to adapt to changing times, focus on solving issues and improve combat readiness and capabilities.

"The policymaking reforms will resolve the institutional obstacles that limit our military's development, and further unleash the efficiency and energy needed for future reforms," he said.