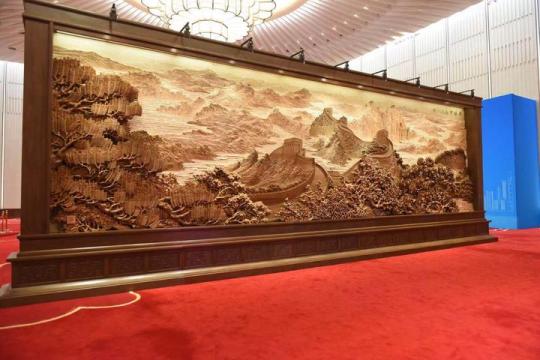 The 13-meter-long, 4.7-meter-high woodcarving screen of the Great Wall. (Photo/zj.zjol.com.cn)

Art is a language without borders and rich in associations.

A tour of the National Exhibition and Convention Center in Shanghai, where about a hundred artworks were on display for the China International Import Expo, conveyed one such association in particular: China's welcoming and openness to the world.

Tong Yanru'nan, chief curator of the expo's main venue, said he selected the artworks for the venue with the concept of China's active opening-up in mind.

Tong was the art director of the BRICS Summit in Xiamen in 2017 and the G20 Hangzhou Summit in 2016.

"Artworks play roles in diplomacy at such events," said Tong, who selected more modern artworks with traditional Chinese elements, such as stones, pines and Chinese characters, as well as the Shanghai cityscape.

"They speak a universal language and help foreign people identify the Chinese culture," he said.

On the entrance of the main conference venue, where President Xi Jinping greeted foreign leaders last week, stands a large woodcarving screen of the Great Wall winding along steep ridges with pines and plums in the foreground.

The 13-meter-long, 4.7-meter-high screen was made over three months by a team of the country's top wood artists led by Lu Guangzheng, director of the China Woodcarving Museum in Dongyang, Zhejiang province.

"The austere grandeur of the Great Wall and mountain scenery represent the country's long history－the deep roots of its national confidence," Lu said.

The trees and flowers are the symbols of the hospitality and vitality of the Chinese people, he said.

On the other side of the screen, 500 magnolias, Shanghai's official flower, are in blossom on a long silk embroidery scroll, with each bud using nearly 100 hues to reflect the subtle changes of shade.

Nine peace doves are also featured on the screen. Some rest on branches, some flutter their wings.

Miao Jianping, a top practitioner of the cultural heritage of Su embroidery, a traditional Chinese style that originated in Suzhou, Jiangsu province, finished the piece with some 100 craftsmen working around the clock in 100 days.

"The speed, the exquisiteness and the blend of various skills made the piece one of a kind," she said. "We all felt proud to showcase the beauty and charm of the Chinese art to the world at the expo."

On the main wall hangs a traditional Chinese ink wash painting 13m wide by 8m high. It is the largest work of its kind and was painted by four prominent artists led by Chen Qi, the vice-chair of Shanghai Artists Association.

The theme of the painting originates from a Song Dynasty (960-1279) poem, and it pictures the flowery, lush spring in the mountains and waters in and around the Yangtze River Delta.

"It implies the wind of reform and opening-up has again come to vitalize the southern part of the country with Shanghai holding the first import expo," Chen said.