Green development takes root in the 'forest capital' of China 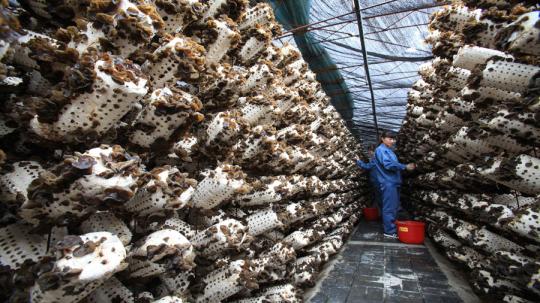 A worker harvests black fungus at a production base in Yichun, Heilongjiang province. (Provided to China Daily)

Sixty years ago, Yichun, the so-called forest capital of China, was thriving thanks to its vast woodland. Day after day, its trees were felled and loaded onto trains bound for markets across the country.

As a result, the once-bountiful green land in northwestern Heilongjiang province was virtually laid bare by the 1990s.

City authorities, seeing ecological catastrophe ahead, slowly began shrinking the lumber industry, and over the past two decades they have led a painful transition to a more sustainable way of life.

Last year, forest coverage in Yichun reached 84.4 percent, up by 17 percentage points over that of 1978, according to the Yichun government.

Liu Jinguo, a 58-year-old forestry worker, recalled the logging industry's boom times when he was a child. He said he rarely saw his father, who left early and returned late from his job in the timberland.

"My father and his colleagues were busy then," Liu said. "They planted trees in spring and felled old trees in winter. Sometimes, he worked in temperatures below -30 C, and his boots would be stuck to his pants by frozen sweat. 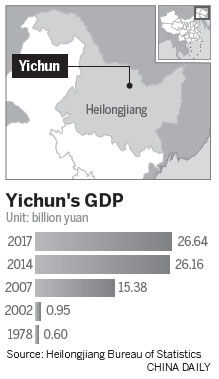 "The timber they felled was used for building projects nationwide," he said, adding that Yichun contributed a lot to the early days of reform and opening-up, when China began a massive construction drive. In the past six decades, the city has produced more than 200 million cubic meters of timber.

"If we connected all this timber together, the length would be equal to going around the Earth and the moon seven times," Gao Huan, the city's Party secretary, told People's Daily in September.

After years of effort to reduce logging, Yichun announced in 2011 that it would permanently halt the practice. It released a guideline on ecological protection and economic restructuring. Within two years, all commercial logging had banned.

Because the sector had employed nearly a third of the population, the city endured tough times and it shifted its economic base. Families on low incomes have worked to develop forest agriculture to make a living.

Wu Jingzhi, a forestry worker in Yichun's Meixi district, began planting black fungus in 2000. Despite having little experience, she invested her family's entire savings - 10,000 yuan ($1,440) - in the project.

"The local government gave us lots of support. People who were willing to plant black fungus could use farmland free. Raw materials were also offered free," she said.

"Few people were willing to do this at that time. I'm a Party member, and I felt I should play a leading role. I bought books and went to Jilin province to learn techniques. I did my best and finally saw good results, which encouraged other villagers to follow suit." Wu made about 5,000 yuan in profit the first year. More recently she has been earning an average of 50,000 yuan a year. Yichun now has almost 2,000 greenhouses growing black fungus.

The city's economic pillar has gradually shifted to green industries - to organic foods such as blueberries and pine nuts, and to free-range pigs. Last year, nearly 50 percent of the city's GDP came from forest foods, wood art and tourism, the city government said. Long Shirong, a sales manager at Yilin Group, which makes forest products, said: "Yichun is in the Lesser Khingan Mountains, which has millions of hectares of forest. It has many rare resources, its air is full of negative ions, its water has never been polluted by factories and its black soil is fertile. Green food has a promising future here."

However, Wang Zhongfu, manager of Yichun Zhongmeng Food Co, said brand recognition is a problem: "Right now, few people know any Yichun brands. We haven't been good at marketing. There's no leading or giant company in the city. Also, young talented people who left for studies or jobs have not been attracted back."

Yichun's natural landscape attracts many visitors each year, which creates a predictable market. Last year, the city's tourism industry generated an income of 11.3 billion yuan, up from 2.5 billion yuan in 2010.

"When visitors come, they can take our green products home with them," Wang said. "Compared with cutting down trees, tourism doesn't give people quick money, but it does give residents an inexhaustible source of income. Unlike before, we're now developing on the basis of protection, not destruction."

Tian Xuefei contributed to this story.