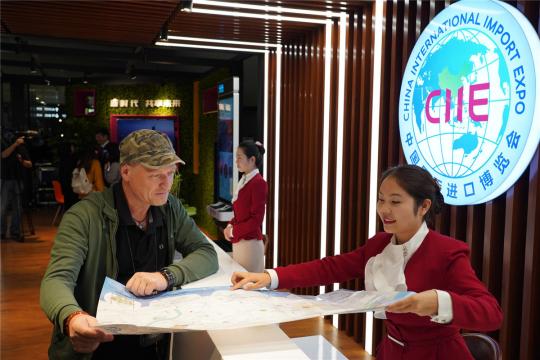 The first reception and service center for the upcoming CIIE is unveiled at Shanghai Hongqiao International Airport on Oct. 22. (Photo by Gao Erqiang/chinadaily.com.cn)

Shanghai's two airports have upgraded their passenger services to help visitors traveling to the upcoming China International Import Expo (CIIE), which would be held in the city between Nov 5 and 10.

Three service centers have been set up for the CIIE at the Hongqiao airport, with 20 staff being deployed to assist visitors with matters related to the CIIE. The most-asked questions so far have been how to register as a participant of the expo and how they can get to the exhibition center, according to Xie Fang, deputy general manager in charge of operations at the Shanghai Airport Authority.

Since late September, round-the-clock foreign language translation services have been put in place at Pudong International Airport which has eight service centers.

"More than 20 volunteers who can speak a total of 12 foreign languages, including Japanese, Korean, Spanish, Russian, French, Arabian and Italian, are ready to offer help to our foreign visitors," said Shi Zhiying from the service center team at Pudong airport.

According to Shi, their service centers have received about 500 inquiries daily since the launch of the service.